How to Build a Successful Highsec Corp, Part 3

Previously, on MinerBumping... Agent Alana Charen-Teng awoxed Lunar Eclipse LLC, prompting the corp's CEO, gimilli, to buy mining permits from Agent Capt Starfox. Bringing Lunar Eclipse LLC into the fold was another glorious victory for the New Order diplomat. But having won the war, could Starfox keep the peace? 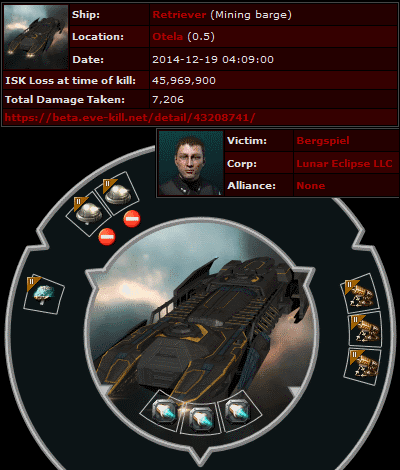 After four wonderful days, Lunar Eclipse LLC's tranquility was suddenly broken: Berspiel, one of their members, got his Retriever ganked by a pair of New Order Agents. gimilli immediately opened a channel with Capt Starfox. 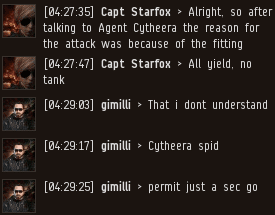 Our Agents are highly coordinated. Within minutes, Starfox got a report from the gankers. He explained to gimilli that Bergspiel was found in violation of the Code. gimilli didn't get it. If a miner has a permit, how can he violate the Code? 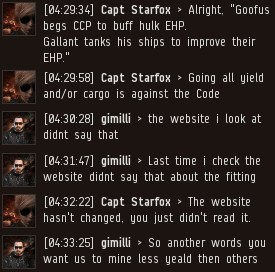 Starfox patiently explained the Code's position on anti-tanked and yield-tanked mining vessels. gimilli was suspicious. Had the Code been surreptitiously altered since he bought his permits? Not likely. 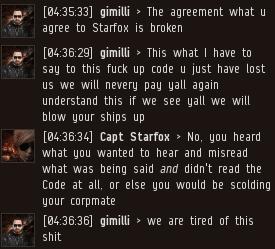 gimilli was hostile and belligerent, and not in a good way. He rattled his sabre and/or saber. Some would respond, "That's treason, so enjoy your wardec." However, Starfox is an accomplished diplomat. And a merciful one. He ignored the idle threats and continued working with gimilli to resolve the conflict peacefully. 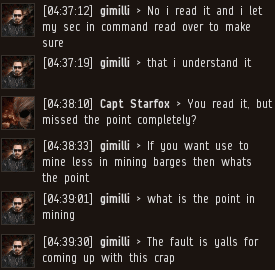 The mining corp CEO had a fundamentally different vision of EVE. In his view, a miner should only care about maximum yield. Miners mine. I suppose only tankers should fit tank, then. 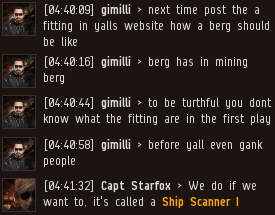 gimilli's paranoia grew. Clearly, he'd been talking to some troublemakers. His head was filled with poison. 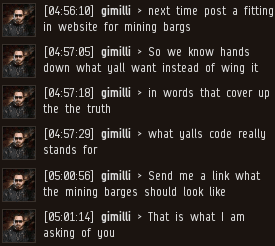 Nevertheless, gimilli was willing to obey the Code when it came to fitting--as long as he was given exact specifications for each ship. In other words, he wanted to follow a program. Like a bot. Starfox didn't like the sound of that, so he cut right to the heart of the matter:

...And we can call this "Bot-Aspirancy.png". 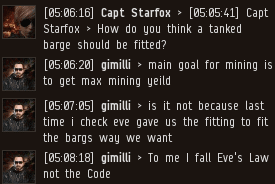 The more Starfox talked to gimilli, the more it seemed like the miner had been spending time with anti-Order rebels.

Shockingly, gimilli even suggested that the Code might be in violation of something in "EVE's bio". But did you know there is currently no EVE character named "EVE"? 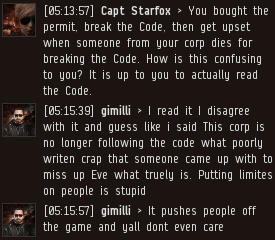 When gimilli expressed his concern that the Code was making people quit the game, it was confirmed: The toxic philosophy of anti-Orderism had infected Lunar Eclipse LLC. 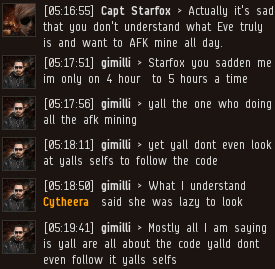 Now, after only four days, the mining corp was in serious jeopardy of seceding from the New Order family. Capt Starfox was faced with the ultimate challenge. Would he be able to save Lunar Eclipse LLC from itself, or would gimilli just keep saying "yall" while his corp burned to ashes?

To be continued...
Posted by MinerBumping at 19:16