The Trial of John Predaetor, Part 1

The opponents of the New Order have accused us of all manner of terrible crimes: Tyranny, extortion, bullying, not following our own Code, etc. Yet every independent investigation into our Agents has only reinforced the obvious truth: Our Agents enforce the Code and they do it well. They do it with honour. I welcome these kinds of examinations, because the people of highsec have got to know whether or not their government is run by crooks.

One fine day in Gelhan, a Venture pilot named John Predaetor was mining Pyroxeres. Like most Venture pilots, he was a new player; he'd only been in EVE for about three and a half years. As for the rest of this story, there was good news and bad news. The bad news? John went AFK. The good news? His Venture was destroyed.

Agent Kalorned's alt did the killing, and so John opened up a convo. He insisted he was innocent. Taking pity on the miner, Kalorned offered him an extraordinarily generous plea deal. All John had to do was admit he was AFK and pay 1 million isk. In exchange, he would get full reimbursement and a New Order permit worth 10 million isk.

As they say, a carebear who acts as his own lawyer has a bot-aspirant for a client. John turned down the plea deal and the matter went to trial. 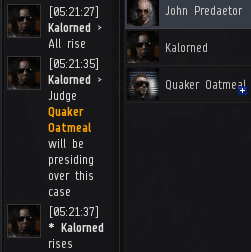 Agent Kalorned forwarded the matter to Agent Quaker Oatmeal, an impartial third party who would serve as judge. 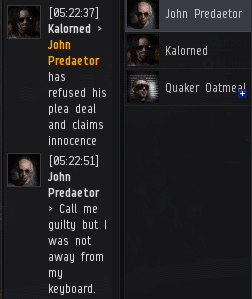 The trial was tense from the moment it began. Instead of simply saying, "not guilty", John chose to be theatrical. 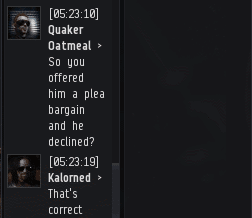 From John's perspective, a plea deal--no matter how attractive--was an admission of guilt. He wouldn't confess to a crime he didn't commit. John really could've used a space lawyer here. (Years ago, perhaps he could have hired notorious miner defense lawyer Babatunde B Babatunde. However, Babatunde has since become an Agent of the New Order.) 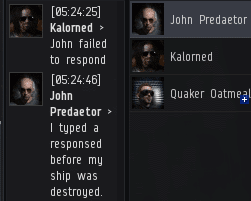 There was a clear fact issue in dispute. Kalorned said the miner failed to respond to his greeting in local, and was therefore AFK. John said he responded before being killed. Whom was Quaker Oatmeal to believe? 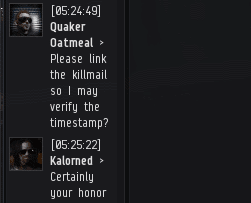 The New Order isn't about bias and power politics. We believe in fairness and justice for all. The trial, therefore, would be decided by facts and evidence. 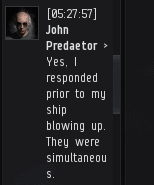 This time, the facts were on the Agent's side. A comparison of the chat timestamp and the killmail confirmed that John didn't respond to Kalorned's greeting until after being destroyed. John further damaged his case by making a contradictory claim: Did he respond prior to the explosion or simultaneously with it? Both!

Then John came up with a new defense. He argued that he was at his keyboard the entire time, but that he was delayed in responding to Kalorned's greeting because he was drinking something. At the very moment John's screen was obscured by a cup of something he was "chugging", Kalorned asked him to speak in local. It was a terrible coincidence. 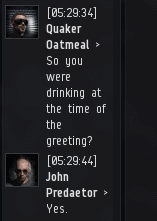 Protip: Don't drink and mine.

From John's point of view, it was simple geometry.

Bonus protip: Get a straw. 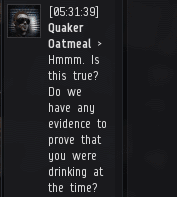 Was the whole "drinking" excuse based in reality, or was it another carebear lie? A governing authority with less moral legitimacy might hit the carebear with the "guilty" stamp and call it a day. But this is the New Order. We're the real thing. The trial was about facts and evidence. The evidence was presented. 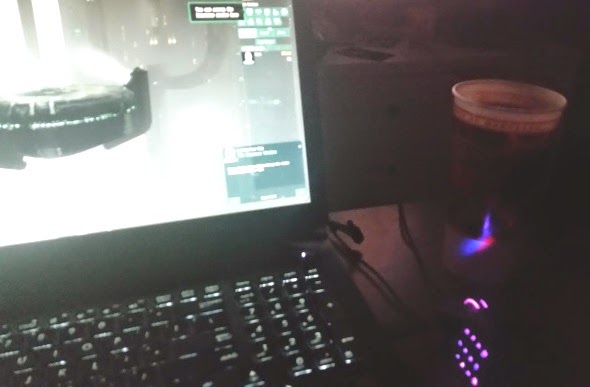 And it was shocking. Was the case against John Predaetor about to be blown wide open?

To be continued...
Posted by MinerBumping at 20:54