Previously, on MinerBumping... Rebel leader JTClone Ares was just about to assist TheInternet TweepsOnline TheInternet and Captain Rick Tyson in their plan to steal CODEdot assets and transfer them to JTClone's alliance, The Clone Republic, when suddenly they learned the New Order had captured the Anti-Ganking channel. JTClone vowed revenge against the New Order. Per TheInternet's instructions, JTClone kept his main offline, instead using his new alts, Sexy Man and Sexy Avatar, to "keep an eye on" the trade hubs.

The loss of Anti-Ganking had been a terrible blow, but JTClone knew the rebellion would ultimately prevail. The Fishing Spider need only wait.

When the time for justice came, JTClone would show no mercy to those who had wronged him. The wrath of the carebear would be something fierce.


Sexy Man > but first I need the op to succeed
Sexy Man > so I can rip code a brand new one
TheInternet TweepsOnline TheInternet > just keep your eyes peeled
Sexy Man > I am watching now
Sexy Man > getting to know my enemy even better
Sexy Man > I learned from an old friend is sometimes not saying anything at all is the wisest thing anyone can do.
Sexy Man > Let your opponent make a mockery of themselves

The architects of the heist told JTClone to continue to sit and wait for all of their spies to come online. It had been a long wait already--about ten hours. JTClone was growing sleepy. But TheInternet and Captain Rick were busy behind the scenes. Since JTClone wasn't logged into his main, he had no idea what was going on in The Clone Republic. 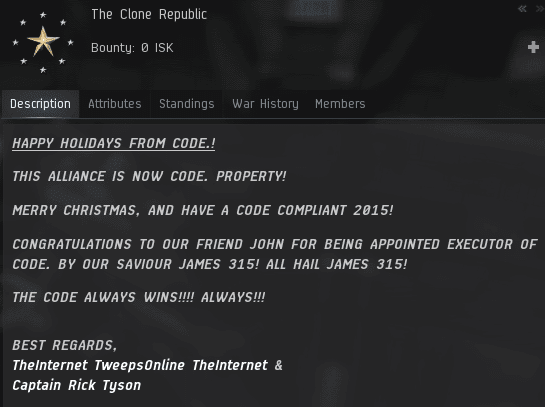 Let the incredible truth be known: TheInternet and Captain Rick were, in fact, deep-cover Agents of the New Order the entire time! It was a shocking twist that not even JTClone himself could have predicted. 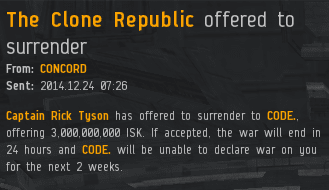 While JTClone's main was logged out, Captain Rick went to work, bringing The Clone Republic into compliance with the Code. Instead of CODEdot being taken over by the resistance, the resistance alliance was taken over by our Agents. Instead of CODEdot surrendering to The Clone Republic for 3 billion isk (which JTClone proposed), it was the other way around. 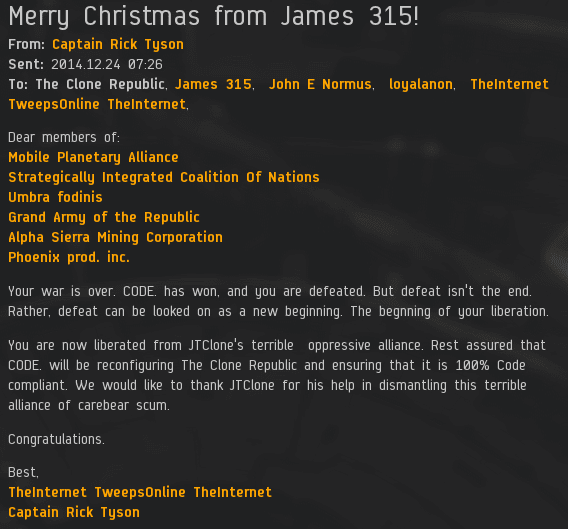 Unfortunately, The Clone Republic was a rebel alliance, built upon a foundation of bot-aspirancy. Captain Rick had no choice but to use his director abilities to kick the old corporations out of the alliance.

Though our Agents were incredibly valiant, some of the credit had to go to JTClone. Without him, none of this would have been possible. Captain Rick awarded JTClone a medal.

Finally, JTClone Ares logged in his main and discovered the truth. The big heist wasn't going to happen after all.

JTClone sent an EVEmail to his own corporation, which was no longer a member of The Clone Republic. He ordered his corpmates to remain offline and have some family time for a few weeks--another example of how highsec carebear CEOs teach their corp members to enjoy EVE.

JTClone hadn't quite kicked Captain Rick out of the corp yet, so there was a brief power struggle. Captain Rick strongly encouraged the corp members to seek employment elsewhere.

JTClone changed the corp description in honour of the great heist. 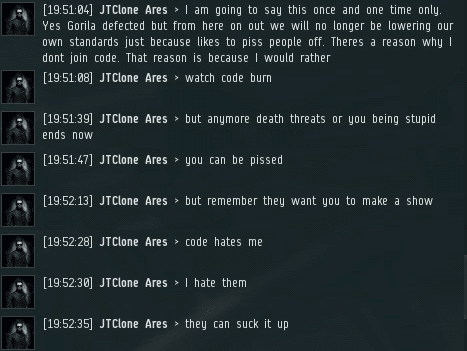 Now it was time for JTClone to deal with the fallout. He did not become the great leader of the resistance that he'd hoped. Instead, he had to do damage control. JTClone instructed his fellow rebels to stop making real-life death threats against the New Order.

Rather than taking command of the entire carebear community, JTClone was subjected to jibes from his fellow rebels.

Had the ordeal been, in the end, an educational experience?

Maybe yes, maybe no. But as the days went by and MinerBumping began the "Ocean's Zero" series, JTClone had a lot of explaining to do. So he repeatedly returned to the Anti-Ganking channel to justify his actions.

JTClone explained that he wasn't sorry to lose his 90-member alliance, since 86 of them were typically AFK or never logged in. Even JTClone's charisma and leadership skills weren't enough to motivate them, it seems.

In what may be the most literal example of the "didn't want that alliance anyway" defense, JTClone claimed that he was already planning to disband the alliance. He had no interest in running an alliance anymore, because he was only capable of recruiting carebears, not getting them to engage in the game. (In this, he shares much in common with his fellow highsec PvE corp CEOs.) 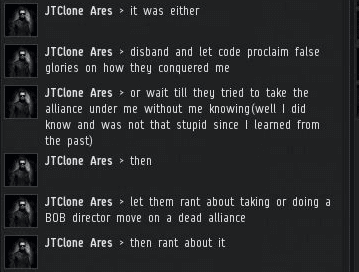 Then JTClone announced the shocking news: The theft of his alliance was all part of his master plan the whole time! He hadn't wanted to disband the alliance himself, because then the New Order could claim victory. Instead, the Fishing Spider deliberately waited for someone from the New Order to come along and steal the alliance from him. That way the New Order... couldn't... claim... victory?

Everything had gone according to plan. It was all a massive troll! For security reasons, his loyal alliance members couldn't be told in advance, so they were under the mistaken assumption that their alliance had been destroyed. But JTClone didn't care, because he was only able to recruit inactive members, and had no future plans to do the alliance thing.

Then JTClone announced that he would once again renew his recruitment efforts. 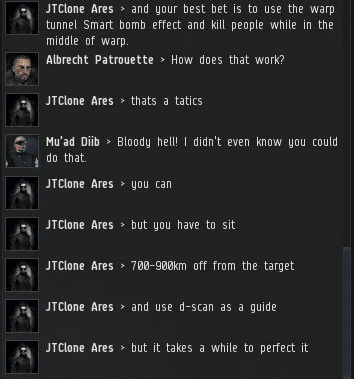 The Clone Republic suffered the same fate as every other rebel endeavor. Though he'd lost his alliance, JTClone Ares would ride again. He went back to work, studying EVE tactics and strategies that he could share with his fellow rebels. He had failed to deliver the death blow to CODEdot that he dreamed of, yet he succeeded in adding another chapter to the legend of JTClone Ares.

We can only hope that the final chapter in that story involves JTClone putting aside his childishness and embracing the Code. Our Agents patiently await the 10 million isk he owes.
Posted by MinerBumping at 20:00