How to Build a Successful Highsec Corp, Part 1

Highsec is by far the most populated section of the EVE galaxy. By a wide margin, it has the most corporations--and the most corp failures. Before you create a corporation of your own, it's vital to learn how a good corp is built. The task begins with the recruitment of good members. 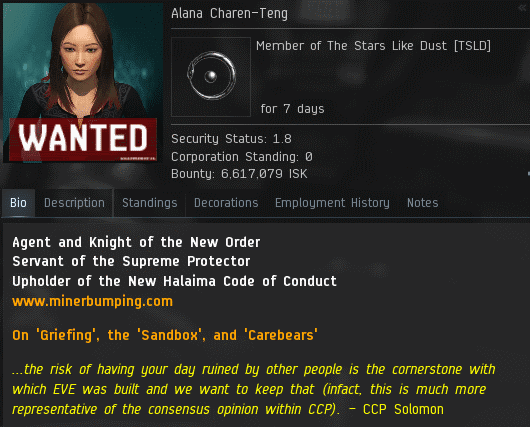 Agent Alana Charen-Teng has an exemplary record. On the strength of her bio and employment history, she is often recruited into highsec PvE corporations. She's usually the most experienced EVE player to join the corp, so the corp's members rely on her for advice. 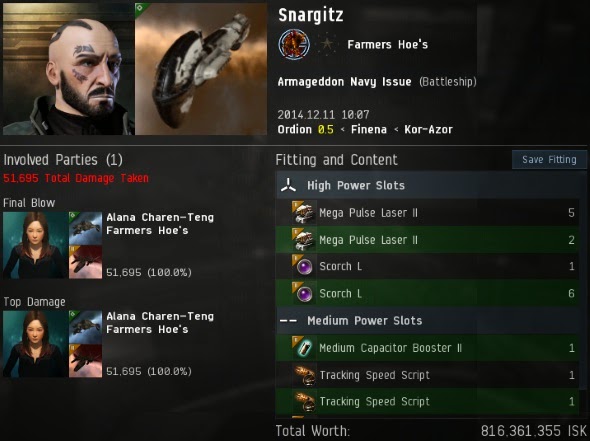 Advice such as, "Don't invite awoxers into your corp," and "Obey the Code." When carebears ignore her advice, they die. 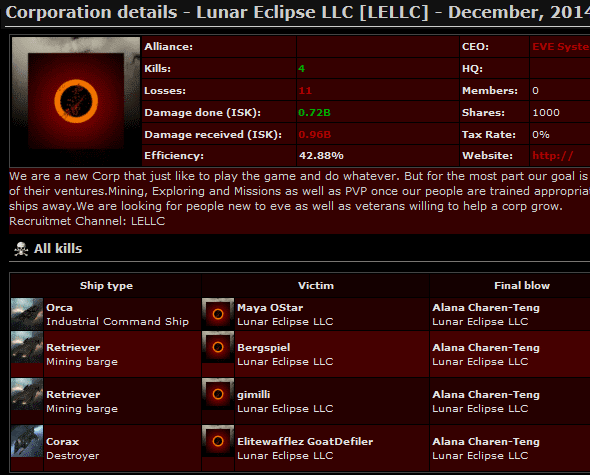 Alana was accepted into Lunar Eclipse LLC, a "new Corp that just like to play the game and do whatever." Before long, Alana was the corp's star PvP'er. In fact, she was credited with every single kill that the corporation made. Unfortunately, all those kills were her fellow corp members. 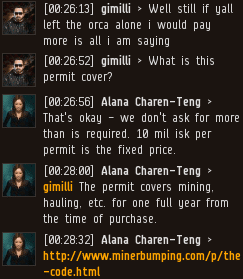 Alana killed every member of a corp mining op that included an Orca, two Retrievers, and a Corax. Impressed by the awesome power of the New Order, gimilli, the corp's CEO, paid Alana 10 million isk for a mining permit. 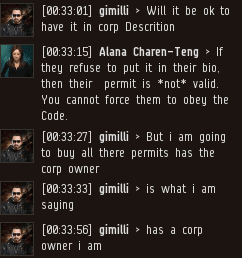 gimilli was also interested in protecting the rest of his corp's members. He wanted to know if he could pay for mining permits on their behalf. Instead of telling his members to put a pledge of loyalty to me in their bios, however, he wanted to put it in the corp description only. 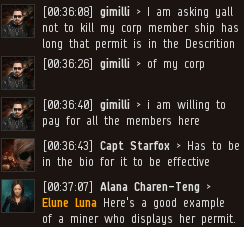 Senior New Order diplomat Agent Capt Starfox was called into the convo to offer his expert opinion on highsec law. He confirmed Alana's reading of the Code: It's essential for each player to have a permit in their bio, because that's what Agents check before they start killing people. 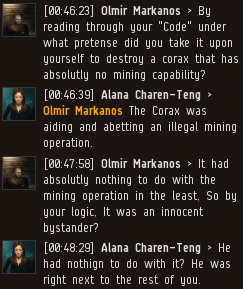 Just as our Agents were about to close the deal, another member of Lunar Eclipse LLC spoke up. Olmir Markanos wasn't as compliant as his CEO. He wanted to know why the Corax had been killed along with the industrial ships in the belt. 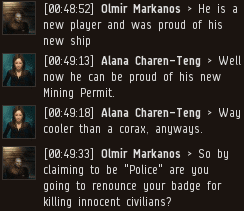 Olmir demanded justice for the fallen Corax pilot. The youth was innocent, he claimed. 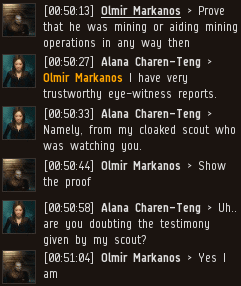 According to Olmir, the fact that the Corax wasn't armed with a mining laser automatically proved the killing was unjustified. However, Alana had a reliable witness in the form of her own scout alt. 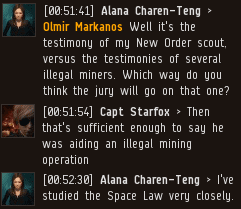 If the matter were brought to trial, Alana's alt would testify that the use of deadly force was appropriate. The Corax posed a threat to the safety of highsec. It was a good kill. 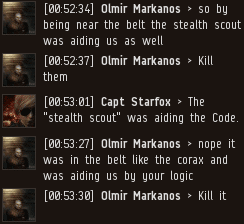 Olmir huffed and puffed, serving up a weird argument about Agents needing to gank their own scout alts. But he knew it was a losing battle. Olmir was disgusted by the way New Order Agents always sided with one another, and how little value they saw in the life of a newbie Corax. He encouraged his CEO to stand up for the corp's members. 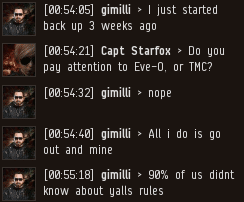 The CEO, gimilli, has only been playing EVE for about nine and a half years. He considered himself a new player, since he returned to the game recently. Instead of buying more mining permits, he protested that "90%" of his corp members didn't know about the Code before they began mining. Thus, at least some of the Lunar Eclipse LLC members did know. A poignant reminder of every carebear's duty to inform the rest of his corp about the Code. 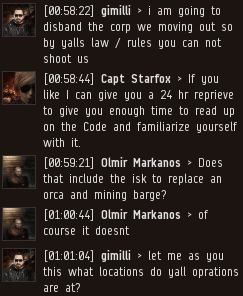 An increasingly cynical Olmir encouraged gimilli not to pay. Clearly, the rebel was having a bad influence on his CEO. Would Starfox be able to bump gimilli back onto the correct path, or did a disastrous fate await this new highsec corp?

To be continued...
Posted by MinerBumping at 19:49