A simple truth about EVE: You never know how someone is going to react to something. For example, consider the suicide gank of Devils ChewToy's yield-fit Mackinaw. He could react by apologizing for his violation of the Code and buying a permit. Or he could get angry and shift the blame onto the gankers. Both are possibilities. Can you guess which route Devils ChewToy decided to take? 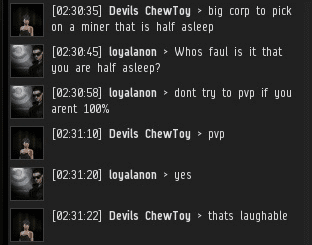 Devils revealed himself to be a member of the Goofus camp. Agents loyalanon and John E Normus had their work cut out for them if they wanted to get a mining permit out of this fellow. And they did want to. 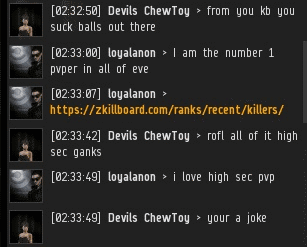 The miner was a gaffe machine. Without thinking, he accused our Agents of having a bad killboard. He didn't realize he was speaking to the #1 PvP'er in all EVE, according to zKillboard. What were the chances? 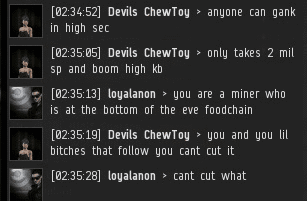 Carebears can be so strange. On the one hand, they demand 100% safety and a style of gameplay so lacking in skill that it's virtually automated. On the other hand, they accuse others of possessing insufficient skill and taking too few risks. It's the same mentality that leads the theme park crowd to say highsec ganking/awoxing/bumping/etc. lacks risk, while they simultaneously believe highsec PvE is too risky. 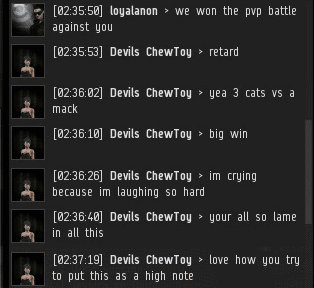 Despite being defeated in battle, Devils just wouldn't give our Agents any credit. He began to rant. Carebear rage level was approaching critical...

Well, that escalated quickly. The miner added himself to the surprisingly long list of highsec carebears who have expressed a desire to hurt gankers' family members. But loyalanon is practically a therapist. He knew how to manage the situation. He offered the miner the chance to clarify that he didn't really mean to make a real-life death threat: 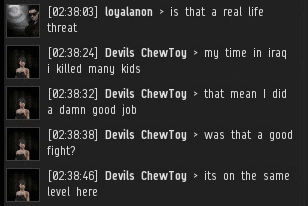 For people who mine all day, highsec miners aren't very good at digging themselves out of a hole. 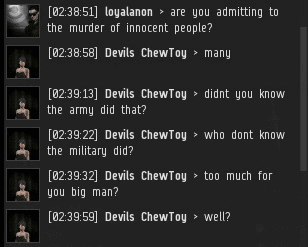 Instead of buying a mining permit, Devils ChewToy confessed to committing real-life war crimes. What a poor decision. Didn't he realize the permits only cost 10 million isk? 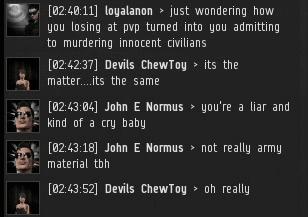 While Devils was busy equating the loss of his fail-fit Mackinaw to the murder of random children, Agent John E Normus chose to step in. He had some doubts about the miner's honesty. 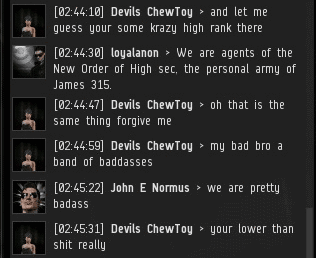 loyalanon pointed out that both Agents were members of an army themselves. Devils thought the comparison ridiculous: The New Order isn't a real army; it only shoots internet spaceships. Only when miners get ganked do the real-life comparisons make sense. 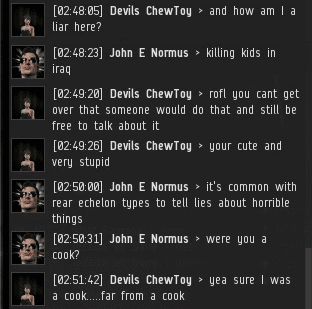 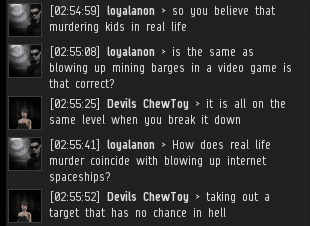 After asking a few follow-up questions, loyalanon reached his own conclusion: 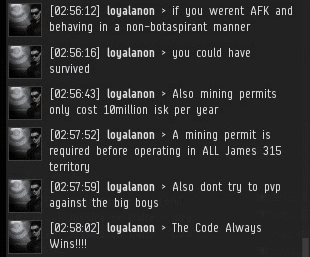 The fact was, regardless of whether the miner committed war crimes and murdered children, he was still guilty of violating the Code by mining without a permit in highsec. Case closed. 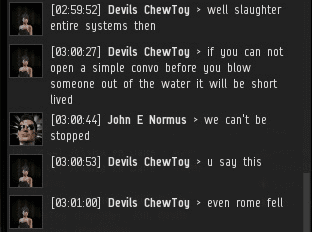 Devils ChewToy refused to buy a permit. He predicted the New Order would fall one day, just as Rome did. Although it's true that the Roman empire eventually fell, that's such a pessimistic way of looking at it. The empire only fell after a thousand years; why not focus on the good times? If the New Order rules over highsec for a thousand years, that's not too shabby.
Posted by MinerBumping at 19:16