Previously, on MinerBumping... An extraordinary sequence of events--let's call it fate--delivered stephen Kalkoken into a private chat with the New Order. After stephen lost his untanked, unlicensed Retriever, he was fished out of the Mining channel by Agents Tisiphone Dira and loyalanon. Now he had the opportunity to live the true EVE experience.

Though stephen had been defiant in the Mining channel, he became much more docile once he was in a safe, Orderly environment.

Our Agents were willing to pardon stephen for his crimes if he behaved like a Gallant and paid the 30 million isk Red Pen fee he owed. stephen waited patiently as the Agents listed the peace terms. So far, so good. 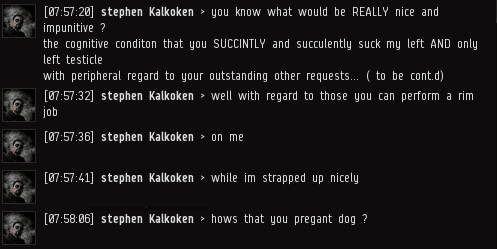 But negotiations broke down when stephen offered an unrealistic counteroffer. This is why the New Order doesn't do counteroffers.

To prevent things from getting out of control, loyalanon followed the time-tested protocol of telling the miner to calm down. I've always found it strange that our critics accuse us of "harvesting tears" when we spend so much time trying to stop carebears from crying.

Both Agents instructed stephen not to produce tears. However, the miner only got more worked up about the Code. He insisted that he'd been following the Code without realizing it. This is, of course, impossible. How can you buy a mining permit without knowledge of the requirement?

Tisiphone knew the score, but stephen was sticking to his story. For now.

Gallant miners admit when they've made a mistake--especially after they've been caught red-handed. Goofuses only get themselves into more trouble. By this point in the conversation, our Agents began to suspect that they might be dealing with a Goofus.

Agents of the New Order are natural problem solvers; it's just the kind of people our organization attracts. Tisiphone recommended that stephen make up for his mistakes and obey the Code in the future. Most people would say that's a reasonable solution. stephen wasn't so sure. He even doubted whether the New Order's dominance over highsec is necessary. (Trust me, I've been to highsec, and it's very necessary.) 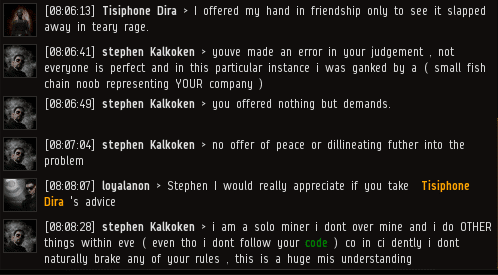 Confusion is a common symptom of bot-aspirancy. Despite having the peace terms laid out for him, stephen complained that no offer of peace had been given. Previously, he adamantly maintained his innocence. Now, however, he admitted "I don't follow your Code," while in the same sentence saying, "I don't naturally break any of your rules."

For a brief moment, stephen expressed an interest in joining the New Order. When he found out that we only take the best of the best, he knew it was hopeless.

The "innocent" act was wearing thin. Tisiphone listed a half-dozen Code violations on stephen's record. With his guilt established beyond question, it was time for stephen to choose whether he was going to live as a Gallant or die as a Goofus.