How to Build a Successful Highsec Corp, Part 2

Previously, on MinerBumping... Agent Alana Charen-Teng awoxed Lunar Eclipse LLC, a "new Corp that just like to play the game and do whatever." gimilli, the corp's CEO, sent some money for mining permits, but he had a lot of questions about the Code. Some rebellious members of the corp discouraged their leader from bringing the corp into compliance. Senior New Order diplomat Agent Capt Starfox was brought in to save them from themselves. 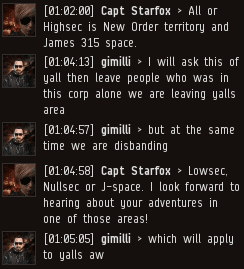 gimilli had a three-part strategy to protect his corp from further New Order attacks. First, he would disband the corp. Second, he'd relocate their area of operations outside of New Order territory. Third, he wanted a guarantee of safe passage. 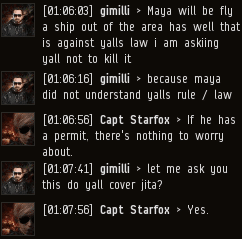 "All of highsec" took gimilli some time to grasp. For nine and a half years, he'd only played in highsec. 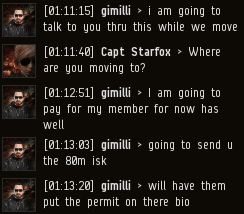 For extra protection, gimilli sent even more money for permits on behalf of his corp. 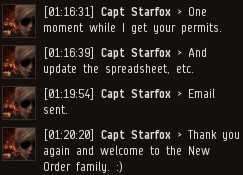 It was another victory for Capt Starfox. Everything was wrapped up with a neat little bow. Everyone was happy, all matters were resolved, gimilli stopped asking ridiculous questions, and... 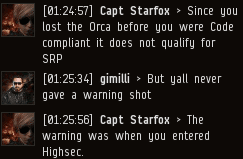 Despite being linked to the Code and purchasing numerous permits, gimilli was as confused as ever. 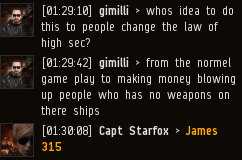 Can we call this "SaviourOfHighsec.png"? 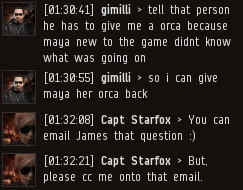 Most permit-owners are people who learned to embrace emergent gameplay. gimilli was fixated on the Orca that had been blown up in the awox attack. It was especially important to get reimbursement because the Orca pilot, Maya OStar, was a brand new player. (Naturally, her character was nearly eight and a half years old.) 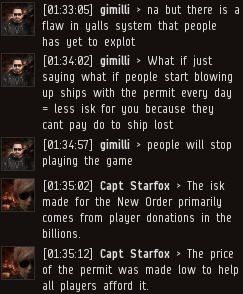 After signing up for New Order citizenship, gimilli was beginning to experience buyer's remose. Nevertheless, Capt Starfox was able to answer all of his questions. 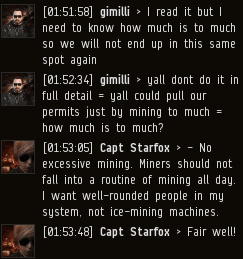 gimilli suddenly discovered the provision in the Code that forbids "excessive mining". He was worried he might violate that provision by mistake. My advice is, if you have any concerns about it, you should mine less. 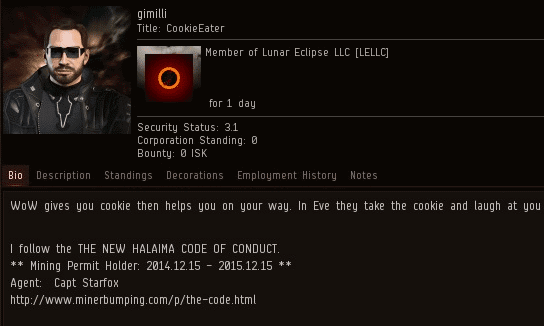 Still, gimilli was brought into compliance, and he bought permits for everyone in the corp. 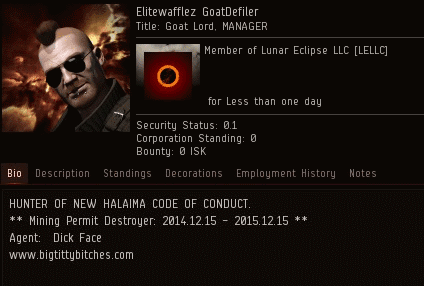 To be continued...
Posted by MinerBumping at 20:12