How to Build a Successful Highsec Corp, Part 4

Previously, on MinerBumping... The CEO of Lunar Eclipse LLC, gimilli, got into a heated argument with New Order diplomat Agent Capt Starfox. One of the Lunar Eclipse LLC miners who had paid for a permit chose to violate the Code with a max-yield, no-tank barge, and was ganked for it. But gimilli blamed the New Order instead! 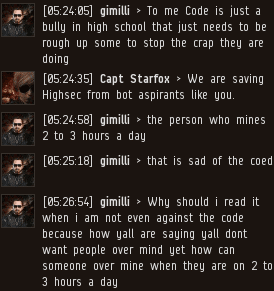 gimilli's faith in the Code was rapidly disappearing. Now all of his built-up resentments and questions about the Code came pouring out. The "no excessive mining" clause, for instance. Despite mining 2-3 hours every day, he considered himself innocent. 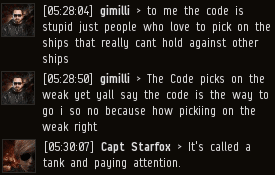 Nor did gimilli understand the rule against flying untanked mining barges. Enforcing that rule constitutes "picking on the weak", according to gimilli, because an untanked ship is a weak ship. Carebears love to hide; they'll even hide behind logical paradoxes. 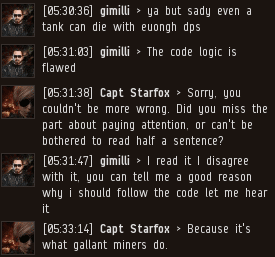 Capt Starfox appealed to gimilli's better nature--if the miner had one. Our Agent encouraged him to be gallant, but the miner couldn't see past his desire for maximum yield. 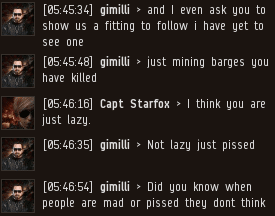 Nevertheless, the miner at least had the presence of mind to realize that he was losing his mind. 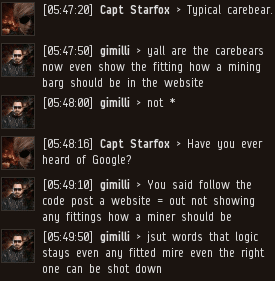 Unfortunately, that loss of mind made it increasingly difficult for gimilli to articulate his thoughts. 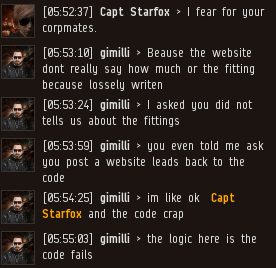 If one's view of the world is sufficiently distorted, everything is seen in reverse. This is what happens to bot-aspirants. gimilli believed "the Code fails", even though anyone with eyes can see that the Code always wins. 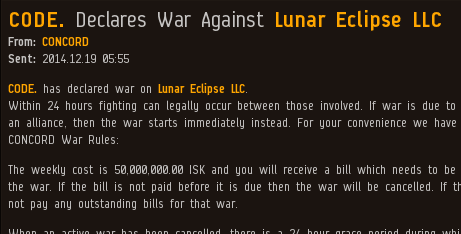 With gimilli in open rebellion against the New Order and its Code, Capt Starfox had no choice but to revoke the corp's mining permits. Since members of Lunar Eclipse LLC intended to continue mining illegally, CODE. declared war war against them. 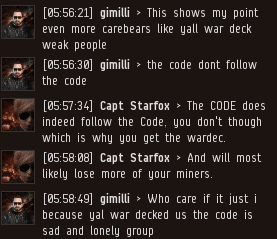 The declaration of war made peace talks even more tense.

No matter what life throws at us, the New Order always stands together. Highsec miners, on the other hand, scatter like cockroaches at the first sign of difficulty. 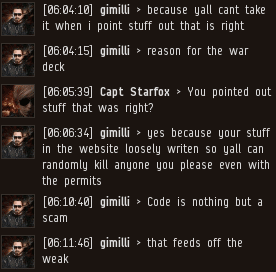 It didn't help that gimilli wasn't exactly an inspiring leader. He repeatedly called his corp members "the weak". Churchill he ain't. 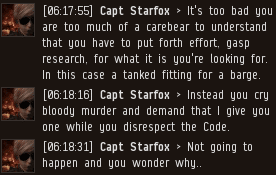 Throughout everything, Capt Starfox remained the consummate professional. He told gimilli precisely what he was doing wrong and explained why Lunar Eclipse LLC was on its way to disaster. Starfox was probably the best friend gimilli ever had in this game--and yet our critics call us "griefers". More like "befrienders". 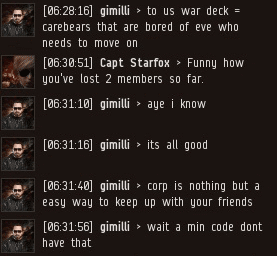 Even as the conversation continued, gimilli's corp was already losing members. If gimilli didn't change his tune in a hurry, he wouldn't have anything left.

But gimilli doubled down on his new anti-Order stance. He declared war against Tactical Narcotics Team, Starfox's corp. 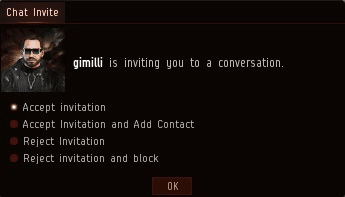 gimilli then convo'ed Starfox to demand a billion isk. Carebears, don't bluff. You're no good at it.

Bonus! Thought experiment: If gimilli had managed to get his hands on a billion isk this way, do you think he would have...

Two days later, gimilli's corp had to withdraw the wardec...

...because gimilli's corp had no members left. It was another magnificent victory for the New Order. It's true what they say: The Code always wins. What makes the New Order extra special is that we're willing to share the fruits of our victory with the very people who would be our enemies. gimilli's corp could have remained Code-compliant and enjoyed all the benefits of New Order citizenship. Instead, they self-destructed. In the end, there's only one way to win in highsec--our way. You can read about it on our website. Highsec CEOs, don't let your corp members suffer any longer!
Posted by MinerBumping at 20:54