The Trial of John Predaetor, Part 3

Previously, on MinerBumping... John Predaetor demanded satisfaction after his Venture was destroyed by Agent Kalorned. John claimed he was not AFK at the time, so Agent and part-time judge Quaker Oatmeal was enlisted to find out the truth. The trial became heated, and the relative distance of John's screen and the size of the cup he was drinking from were hotly contested. Though Kalorned had never lost a case before, an unexpected ruling in John's favor called the outcome into doubt.

John did a victory lap, showing off all the data he had at his disposal.

Now it was Kalorned's turn to ask questions. The newly relaxed and confident John Predaetor casually leaned back in his chair and told Kalorned to fire away. 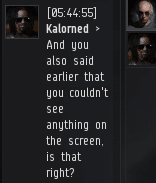 The Agent eased into his line of questioning. Kalorned is a very experienced prosecutor of carebears. It would be a mistake to underestimate him.

Though he felt he had the edge, John remained on his guard. He dug in his heels and rattled off statistics with all the ease of an Aaron Sorkin character. 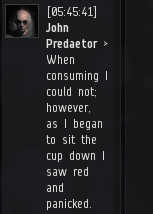 John explained that he had caught sight of Kalorned's blinky-red ganker alt at the moment he lowered his beverage. It had been a traumatic experience.

Then things began to unravel.

The miner didn't give an inch. But it was too late. Agent Kalorned was already closing in for the kill. 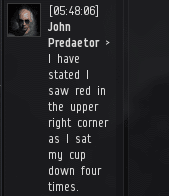 Frustrated, John urged them not to focus too much on that one detail of his story. There was nothing new here. Nothing to see.

With the dramatic flair for which he is known, Kalorned dropped a bombshell on the proceedings. This time, it was judge Oatmeal who was speechless.

John panicked. He sensed the shift in momentum, and it was seismic. Things were getting out of control.

In seconds, Quaker Oatmeal tested Kalorned's hypothesis with his own cup and computer screen. The results were devastating. Now John Predaetor understood how Kalorned had earned his reputation. If the miner didn't think of something fast, his case was doomed.