If you've ever wanted to make a difference in EVE, the New Order is the place to do it. There's simply no more effective way to make your mark. Hundreds of thousands of EVE players have been forced to adapt to the New Order. Whether they're the recipients of ganks, bumps, awoxes, or wardecs; whether they were forced to tank up or move out; whether they read about or raged about out us, their games were changed due to our presence. 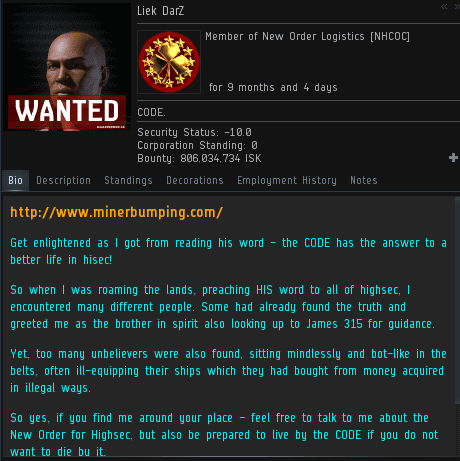 Thus, Agents of the New Order provoke an immediate reaction from the highsec populace wherever they go. Even an Agent merely entering local is enough to bring life to an otherwise dead system. What kind of reaction does the presence of an Agent inspire? Good and bad. Let's look at a fair, representative sample, provided courtesy of Agent Liek Darz No cherry-picking here.

An AFK Agent still casts a long shadow. The New Order is pretty much the only topic of conversation in highsec.

Many EVE players are unafraid to admit that they admire the New Order--and our valour in the face of EVE's game mechanics.

A cheering section is always welcome. Though some say we're "anti-miner", our support in the community is wide and deep. 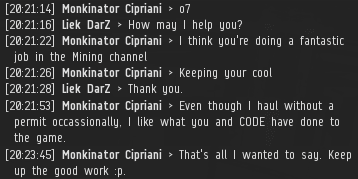 Code violators, too, look upon much of what we do with sympathy. Rebels and carebears, you may not like us, but you know you need us.

When we first arrived on the scene, skeptics doubted our staying power. Only the most ignorant denialist can do so today.

Of course, it's not only the miners who voice their support. Pro-Order forces abound.

In general, suicide ganking miners is not profitable. The New Order's extraordinary financial resources come from donations from the public. More than 600 billion isk worth of shares have been purchased from me. Private donations also trickle in to individual Agents.

There's no denying it: Rebellious sentiments can still be heard in highsec.

Uh-oh. Another negative one. Could this be a sign of things to come?