CODE Is the Number One Alliance in EVE

CAUTION! The information I am about to share with you is very dangerous. If you were to share it with a carebear, the next thing you'd need to say would probably be, "miner calm down".

CODE. is EVE's #1 alliance for June, according to Eve-Kill.net. We destroyed a larger amount of isk than everyone else in the game: Over two trillion isk. That's more in one month than CODEdot killed in its first year. It's more than double our second-best month. Even factoring out kill-assists from the Burn Amarr event, which was primarily a Goon/Imperium affair, June 2015 was our best month by a very wide margin. Some say EVE is dying, but we're doing better than ever!

Here's a helpful chart to drive home the point of how great we are. Again, before sharing it with anyone, be prepared to ask them to calm down. 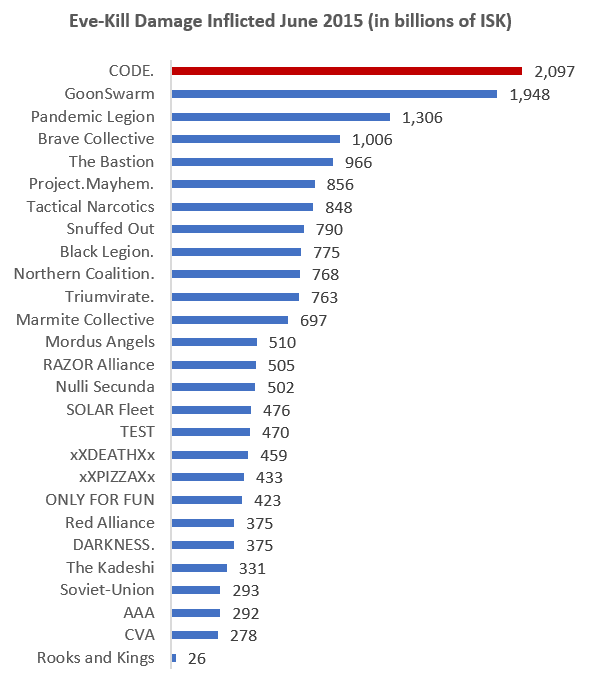 As mentioned before, this includes kill-assists, although that's also true of the nullsec alliances, and to a much greater degree.

Isn't it amazing what a relatively small group of elite PvP'ers can accomplish, when guided and motivated by the Code? The simple truth is that the Code always wins. For the longest time, our enemies have been trying to bury their heads in the sand, to remain in denial. That becomes quite a difficult task when we're destroying two trillion isk of their stuff. Everyone is being forced to deal with the reality of the New Order. If they aren't killed by us, they're adapting or accommodating or accounting for us in some way. The Code is supremely relevant to their lives.

The numbers don't lie; clearly, there is a great hunger for accountability in highsec today. Our friendly Agents are hard at work, making sure highsec gets exactly what it deserves.
Posted by MinerBumping at 18:13