The Rise of the Space Neocons, Part 4

Previously, on MinerBumping... TheInternet TweepsOnline TheInternet was recruited to join PwnySquad, a highsec PvE corp led by koiso Phoenix. Lured by the promise of an expertly managed ore buyback program, koiso promoted TheInternet to director and began showering him with free money and ships. TheInternet returned the favor by introducing koiso to some friends from Pandemic Legion.

The PL recruiters agreed to make PwnySquad into a PL feeder corp and give them free space in nullsec. After koiso transferred all of her assets to TheInternet to be shipped out to nullsec, it turned out the whole thing was a scam engineered by CODE. koiso lost everything. 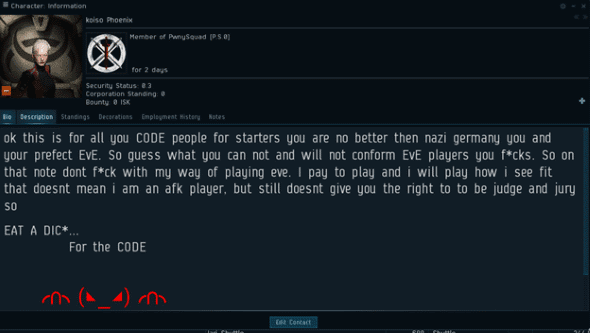 The next day, koiso had a new bio. Apparently she had done some reading on the New Order and its Code. Did koiso also read about TheInternet's past adventures on MinerBumping?

As soon as TheInternet got online, koiso wanted to meet with him. He got a bad vibe from koiso; it felt like he was being summoned to the principal's office.

koiso hadn't bothered doing a background check on TheInternet during the recruitment process, but now koiso was suspicious. She'd be crazy not to, after having lost all of her assets in the "PL" scam.

...Or not. It was just another ordinary day in PwnySquad.

Out of nowhere, koiso gave TheInternet an Orca, a Bowhead, and two billion isk. After all, TheInternet claimed he'd lost his assets during the PL scam, too. But where did koiso get all the money she was throwing around now?

TheInternet was afraid koiso had gotten herself a PLEX addiction. For now, though, he put those fears aside. In the wake of the PL debacle, PwnySquad needed to be rebuilt from scratch.

TheInternet convinced koiso that he needed to buy yet another freighter using PwnySquad funds.

koiso generally took all of TheInternet's advice, but there were some things koiso felt strongly about now. She'd developed a phobia of New Order Agents. TheInternet could only cringe when hearing the slur against CODEdot's brave Knights.

Since TheInternet had bought himself another freighter instead of POS materials, he needed additional corp funds.

Another busy day for koiso came to a close. TheInternet, however, would stay up late to do some recruiting.

When koiso awoke the next morning, she was delighted to see that TheInternet's efforts had paid off. Two new pilots joined the corp. TheInternet was able to vouch for both of these gentlemen, so no background checks or APIs were needed.

Even better, the new recruits were able to fly expensive industrial ships! Sadly, they didn't possess any ships of their own. They would need to rely on the corp to provide them. 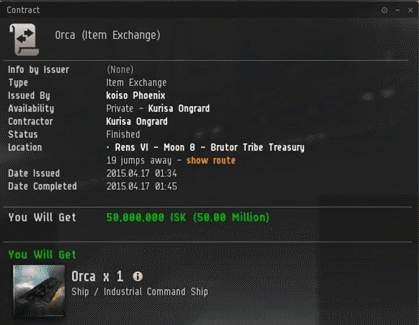 koiso began transferring ships and isk to the newest members of PwnySquad. And it wouldn't be long before they proved their worth.

To be continued...
Posted by MinerBumping at 17:57