The Rise of the Space Neocons, Part 2

Previously, on MinerBumping... An elite unit of New Order Agents calling themselves the Space Neocons resolved to keep the art of awoxing and scamming alive. Agent TheInternet TweepsOnline TheInternet was invited to join PwnySquad, a highsec PvE corp run by koiso Phoenix and her CEO alt. TheInternet had grand plans of starting an ore buyback program. But was koiso worthy, or was she a bot-aspirant who needed to be punished?

A red flag was raised. Why would koiso buy Bowheads in bulk? She claimed that she'd "learned a few things" after playing EVE for a while. TheInternet worried that koiso might have "learned" to buy large amounts of PLEX and cash them in for isk.

Unlike the rest of PwnySquad, TheInternet's sole purpose in joining the corp was to test the corp's leadership. koiso's advice on security was to "find some legit players" and then see if they pass a "gut check". The use of APIs was unnecessary.

The next test: Would koiso rescue a corp member in need?

Agent Siegfried Cohenberg, one of EVE's most legendary bumpers, was on hand to stage a ransom attempt on TheInternet's borrowed Bowhead.

However, koiso had no interest whatsoever in paying ransoms, even if it was for an amount substantially less than TheInternet's ship. So noted. After TheInternet was satisfied that koiso wouldn't pay a ransom, his Bowhead miraculously escaped Siegfried's clutches. The crisis passed, and it was back to business as usual.

It soon became clear that TheInternet was indispensable to the corp. Time for a promotion.

koiso made good on her promise to make TheInternet a director of PwnySquad. But there was no time to bask in the glow of his victory. He immediately asked for an Orca. 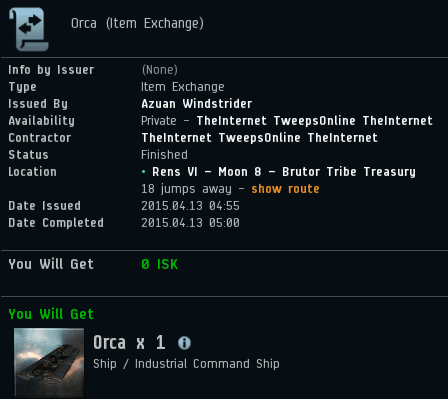 A fresh Orca appeared. How much money did koiso have, anyway? And did she deserve to keep any of it? To find out, TheInternet initiated the next phase of his program.

At TheInternet's request, a friend declared war against PwnySquad. Wardecs are a fact of life in highsec; they're a compromise for the absurdly powerful CONCORD umbrella. Corporations that choose to do business in highsec can react to wardecs in a good way or in a bad way--like an EVE player or like a carebear.

Luckily, koiso had a plan. She would shift the corp toward small gang tactics. What did that mean, precisely?

TheInternet's heart sank: koiso's war strategy was to do nothing, and to continue recruiting new players, who would have the privilege of doing nothing. What fun! If CCP wants to improve the new player experience, they shouldn't get rid of wardecs--they should get rid of carebear CEOs.

Our Agent wasn't content in letting PwnySquad go down the "do nothing" route so commonly employed by highsec PvE corps. He offered to enlist the support of powerful friends. koiso jumped at the chance of solving the problem with money.

TheInternet made a judgment call and took 620 million isk from the corp's 350 million isk mercenary budget. In his discretion, he chose to pocket the money for himself, rather than going to the effort of trying to locate quality mercs.

What koiso didn't realize is that she was being subjected to a "gut check" herself. So far, she wasn't exactly passing with flying colors. Still, TheInternet wasn't willing to render final judgment just yet. Unanswered questions remained. For example: How much more money could TheInternet get out of her?