Hmmm. People don't call me a "pedant" very often. Welcome to the latest edition of the Grab Bag! 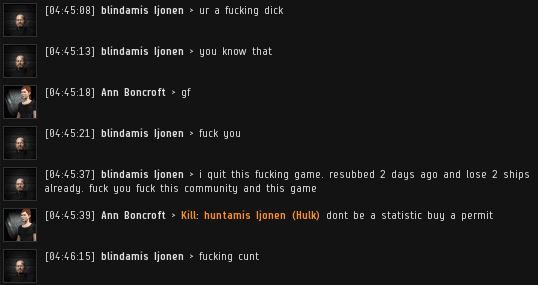 Speaking of statistics, CCP's study on ganking suggests that miners should more frequently say "Fuck you, fuck this community, I'm more likely to renew my subscription since you ganked me." 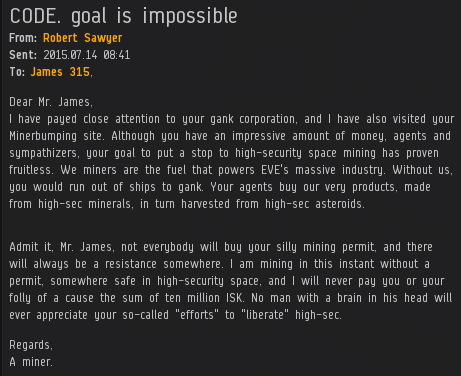 Ah, the carebear. So lacking in vision. If you had asked someone three years ago if we could accomplish any of the things we've already done so far, they would've told you "That's impossible. No way you'll be able to do that." The impossible is our specialty.

Another gem from Anti-Ganking. Can our Agents be scared away by invisible battleships? Or do you first need to announce your cloaked battleship system to the world for it to serve as an effective deterrent?

From the Russian, "You cheap and powerful shit I Ssali at you with a high bell tower". Normally I would let this sort of thing slide, but the bell tower reference makes me want to call in a native speaker for a proper translation. 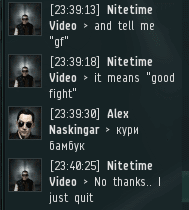 By international agreement, there must be twice as many miner tears in Russian as any other foreign language. Here, Alex Naskingar invited our Agent to "smoke bamboo". 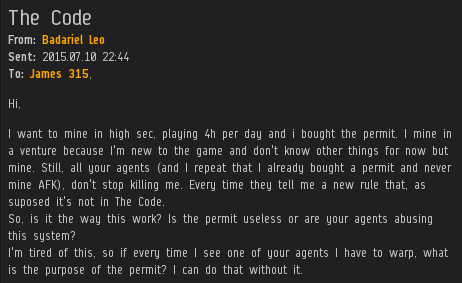 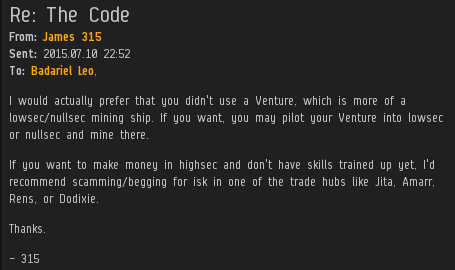 Back when I was a 2006 newbie scrounging for isk in lowsec, the Venture would've seemed like a miracle ship. A giant ore bay? Built-in warp core strength? Such a shame to see its potential wasted in highsec. 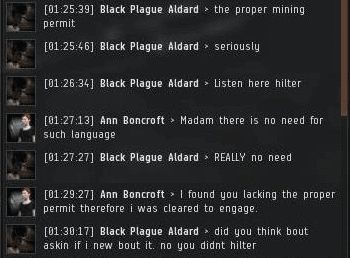 I don't know what they're teaching people these days, but I think a lot of people have gotten the wrong impression of Hitler. They seem to think he was a law enforcement officer who went around selling mining permits. 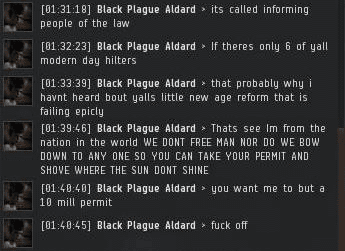 Actually, if you look closely, the carebear repeatedly calls our Agent a "hilter", not a "hitler". What's a hilter? Someone who is armed to the hilt, I suppose. 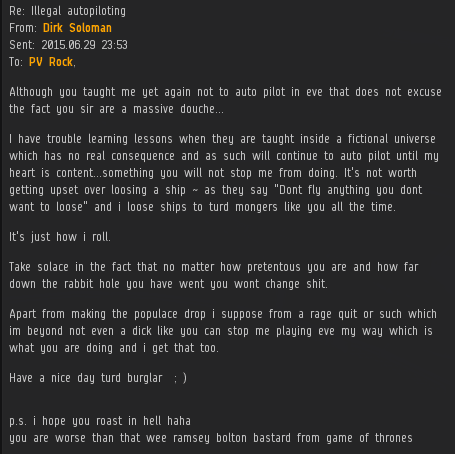 Dirk Soloman says he'll keep autopiloting no matter how many times he gets ganked. He has only been ganked a handful of times, though. The New Order isn't going away any time soon. I suspect Dirk's resolve will run out long before the Code's.

Everyone's got a sob story these days. Wise up, highsec! An ounce of permit is worth a pound of reimbursement requests.

Carebears can be so disappointing sometimes. Even when you narrow things down to two choices, they can still manage to pick the wrong one! 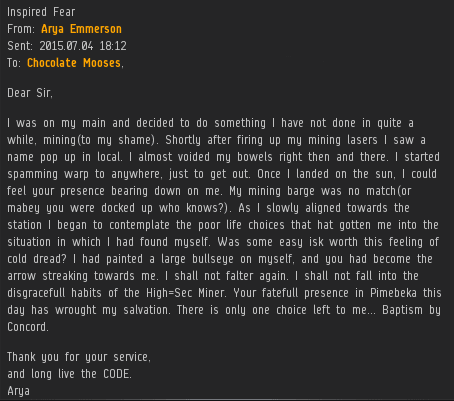 Then there are the satisfying moments. Some miners can be converted merely by seeing an Agent's name in local. That's power.
Posted by MinerBumping at 20:57