Elite PvP, by the Numbers

Last week, a sensation was caused by the release of Eve-Kill.net statistics showing that CODE. is the #1 alliance in EVE. I occasionally give advice to the Anti-Ganker "community", because I care about them. I do so once more today: If your goal is to stop us from getting kills, and we kill more than everyone else in the game, then you might be doing it wrong.

Although CODEdot destroyed more than any other alliance in EVE during the month of June, there were some in the community who questioned whether this truly constituted elite PvP as such. I returned to the numbers and did what some refer to as "going full Gevlon". It comes down to damage inflicted per alliance member. For example, we inflicted over twice as much damage as Brave Collective, but they have 32 times as many members as we do. Thus, we are more than 64 times as elite as Brave Collective is.

This can be a tricky measurement, as a tiny alliance of only a few people could easily earn a skewed damage/member ratio. Thus, the chart below only includes the same alliances as last week's chart: To earn a spot on the chart, an alliance must inflict a very large amount of damage. Rooks and Kings is also included. 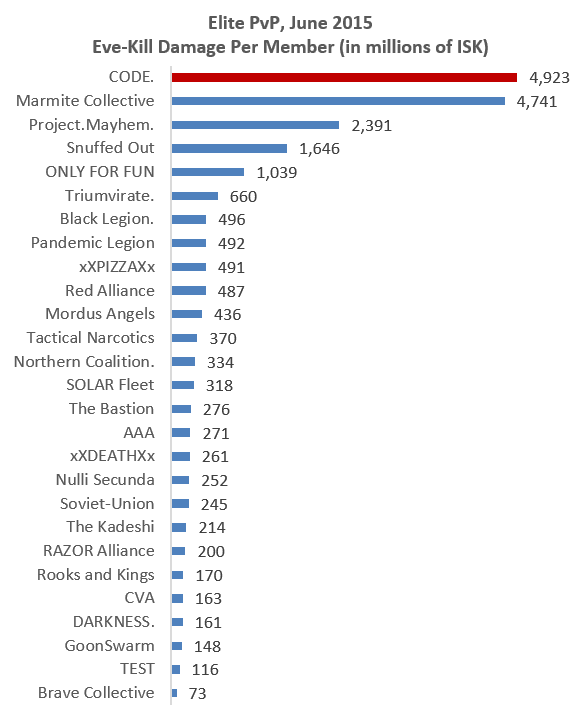 As we can see, the empirical evidence shows us that CODEdot is not only the most destructive alliance, it is also performs the most elite PvP. We are about 10 times as elite as Black Legion. and Pandemic Legion, to offer two examples.

Some other points of interest. As you might expect, the alliances of the greatest size are at the bottom of the list, as they contain their PvE players under the same umbrella. Smaller alliances, more focused on PvP, are at the top. (The exception is Rooks and Kings, which fails to punch above its weight.)

But it's especially illuminating to consider what kind of alliances they are. The Marmite Collective is the second-most elite PvP alliance in the game, and also happens to focus on highsec PvP. The #3, #4, and #5 spots all go to alliances that spend most of their time in lowsec. Nullsec alliances rank lower.

What conclusion should we--must we--draw from this chart? First, the hypothesis that the CODE always wins is confirmed (again). Second, elite PvP is concentrated most of all in highsec, then lowsec. Carebears often say to gankers, "If you want PvP, go to nullsec and leave us miners alone." We have scientifically proven that it is the carebears who should leave highsec, which is an arena of elite PvP. Miner, calm down and go to nullsec if you don't like PvP.
Posted by MinerBumping at 18:40