Space Lawyer: The Next Generation, Part 1

Another blissful day in the Gamis system. And why shouldn't it be? Gamis had the Code, after all. But the peace and tranquility of Gamis was rudely interrupted by an unlicensed Iteron V screeching through the system without so much as a "praise James". Agent Kalorned decided it was time to pump the brakes on whatever the heck was going on there. He began bumping the industrial ship away from the gate and initiated a convo with the pilot.

Thanks to Kalorned's elite bumping technique, he'd successfully pulled Allesdair Crendraven's Iteron V over to the side of the road. Allesdair seemed impatient, which is always a red flag. Where was he off to in such a hurry? 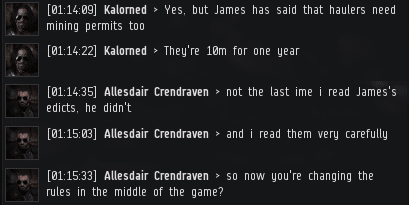 Kalorned was taken aback. From the dawn of the New Order, space lawyers have been with us. They are becoming less common, though. Was Allesdair really going to space-lawyer in Gamis, of all places?

It was confirmed. Allesdair was a space lawyer. He questioned Kalorned's interpretation of the Code and then immediately brought CCP's rules into the equation, too. This is sometimes referred to as "space-lawyering from both ends". 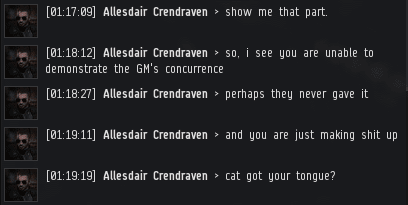 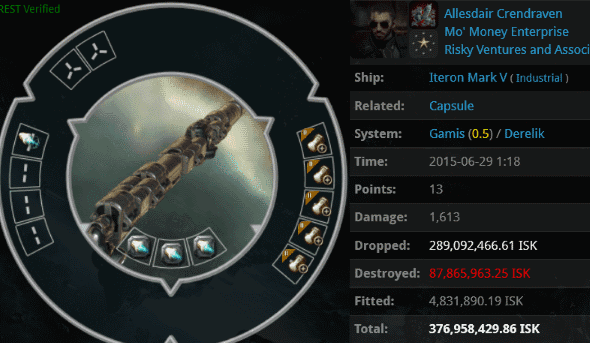 The carebear's claims about not being a miner held less weight once Kalorned sifted through the cargo section of the killmail. Sure enough, there were two Retrievers and some mining equipment. Maybe Allesdair was "just holding them for a friend"?

With the destruction of Allesdair's 376 million isk ship and cargo out of the way, our hero was free to continue the conversation. 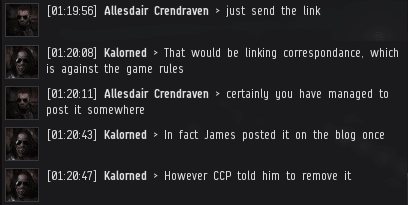 It was true. Years ago, CCP politely threatened to ban me if I didn't remove the legendary chat logs in which a GM helped me develop the idea of the New Order. Given the historic nature of the logs, I sent in a request for an exception, but my request was denied. 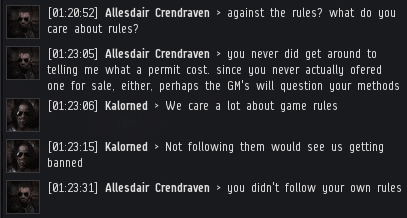 Allesdair was a new breed of space lawyer for a new generation of EVE players. Over the past three years, many EVE players have grown up with the Code, you might say. It is integral to the highsec experience. Perhaps that is why it felt natural for Allesdair to blend the Code and CCP's rules together. When he accused Kalorned of being in violation of "the rules", he referred to both the EULA and the Code. Could this new evolution, this hybrid space law, bring Allesdair the success that eluded so many space lawyers of the past? 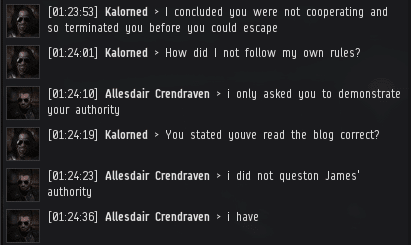 It was a disaster. Allesdair, who had claimed to be so well-versed in MinerBumping, couldn't think of any posts where Kalorned was mentioned. All things considered, visiting Gamis probably wasn't Allesdair's smartest move.

When all else fails, the space lawyer reaches for the nuclear option.