Yes, We Can Kill Your Freighter, Part 2

Previously, on MinerBumping... A valiant New Order/Imperium task force succeeded in destroying Aaron Alckschild's freighter, which was filled with BPOs. The total loss was over 10 billion isk--a frightful price to pay for the crime of bot-aspirancy. The bumper, Enia McCool, had offered to let Aaron go free for a small ransom. But Aaron had been supremely confident that he couldn't be ganked in a 1.0 security system, so he taunted the gankers. After losing all his stuff, Aaron changed his tune completely. He pleaded for the safe return of the blueprints.

The carebear claimed to have only 1 billion isk left in his wallet. Almost everything he owned was in that freighter.

Aaron was in a poor bargaining position. It was trivially easy for Enia to sell the blueprints on the open market for full price. The gank did occur in highsec, after all.

Only a few moments earlier, Aaron had 1 billion in his wallet. Now he offered 3 billion for nearly 10 billion worth of BPOs. Typical carebear. 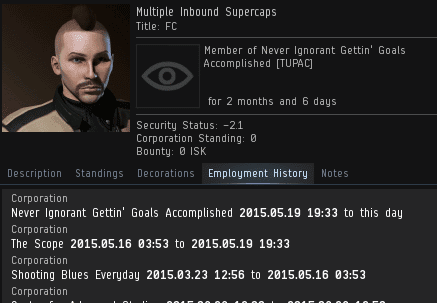 Enia was now preoccupied with the task of tending to the newly acquired treasure trove. She invited Multiple Inbound Supercaps to the convo. Multiple was authorized to negotiate with the distraught carebear. However, Aaron was so busy wailing that he didn't even notice Multiple's appearance.

The first step, clearly, was for the carebear to calm down.

Actually, Aaron didn't calm down very much. But he at least seemed more in control of himself once he did all his bawling in lower-case.

For the first time, Aaron learned that the gankers didn't have all 10 billion isk in their possession.

It took a while for Aaron to come to grips with the fact that he'd lost much of his BPO library. He couldn't get those blueprints back, even if the gankers wanted him to.

An EVE player since 2010, ladies and gentlemen.

One of the reasons most of us don't have a great fondness for highsec PvE'ers is that they lie so much. To summarize, Aaron claimed to have only 1 billion isk left to his name. Then he offered 3 billion for the BPOs, and now he had only 2 billion--all within the space of an hour. The carebear's wealth was rapidly fluctuating.

Seconds later, Aaron was back up to 2.5 billion isk. And carebears accuse our Agents of being untrustworthy! For the sake of comparison, a New Order mining permit cost 10 million isk three years ago, and it costs the exact same amount today. You can safely rely on the New Order.

For some reason, Aaron felt absolutely entitled to a hefty discount. But when was the last time a freighter pilot gave gankers a break?

Deprived of the one thing he cared about, the carebear became unmoored from reality. He was flopping around like a fish out of water. Did Aaron have any hope of attaining redemption--or at least some of his precious BPOs?