Who the Hell Cares?

Perhaps it would be impolite to refer to a part of highsec as a "slum", but it's fair to say that Verge Vendor isn't the finest region of New Order space. It needs a lot of work. Fortunately, Agent Zopiclone was up to the challenge.

It's corporations like Hardcastle Industries that give Verge Vendor a bad name. Speaking of bad names, they spelled it as "Hardcastle Industires". You can imagine why the corp attracted Zopiclone's attention. 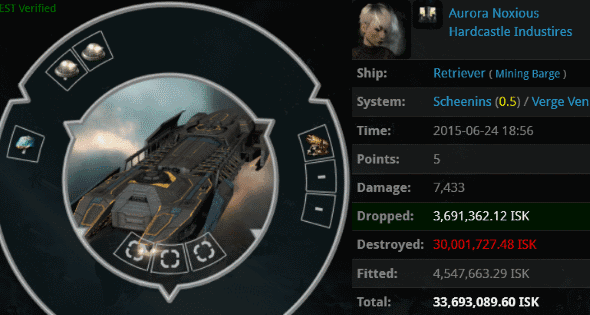 As expected, Zopiclone discovered one of Hardcastle's miners engaged in Code violations. The offender in question, Aurora Noxious, sat patiently as Zopiclone's Catalyst approached. Aurora made no attempt to escape.

The miner claimed total ignorance of the Code. That's not unusual, but there was something about the way Aurora was behaving that seemed a bit off. Zopiclone's suspicions increased.


Zopiclone > Of course you were. Otherwise you would not have been blown up while a Catalyst was approching you.
Aurora Noxious > well honestly I didn't think some idiot would come blow me up in .5
Zopiclone > Please see the following website...
Zopiclone > http://www.minerbumping.com/p/the-code.html
Zopiclone > The CODE rules high-Sec and we will blow up anything we like without a PERMIT

Our Agent knew Aurora was a troublemaker, but she didn't realize the full scope of the danger until she looked up Aurora's bio. 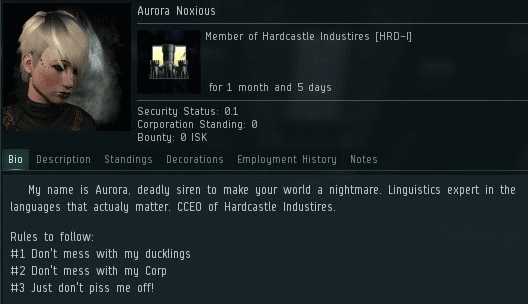 Incredibly, Aurora was the "CCEO" of Hardcastle Industires. This meant that her bot-aspirant ways were bound to trickle down to the rest of the benighted corp members. Zopiclone was determined to cut the head off of the snake. Otherwise Hardcastle was doomed.


Aurora Noxious > well thanks to you I don't have the 10m for the dam permit
Zopiclone > That is very doubtful. I have heard that line before.
Zopiclone > Compliance is mandatory if you wish to Mine according to the Code.
Zopiclone > You and your 7 other Corp members also should get permits if you would like to Mine.
Zopiclone > You will not set a good example to your ducklings if you dont even know about the CODE.
Zopiclone > As a CEO you should know better.

The CEO was lectured by Agent Zopiclone. As everyone knows, New Order Agents sit at the top of the highsec hierarchy. Some carebears dream of starting their own corp solely for the purpose of going on an ego trip. Carebears, don't bother. Even as a CEO, you don't really run your corp; the New Order does. Your position in the corp leadership structure is beneath that of every New Order Agent who bothers to take an interest in your corp. The same goes for carebears who run highsec alliances. If you create a corp or alliance in highsec, do it for the right reasons.

Before long, Aurora was spilling the tea. She admitted to crimes against her own corp. She didn't do anything for her corp, and was only the CEO because her child told her to do it. Sadly, Aurora's style of management is not uncommon in highsec.

"Who the hell cares?" is the motto of bot-aspirant PvE corps all across highsec.


Aurora Noxious > and what guarentee do i have if I buy one "permit" from you that it is actually worth anything
Zopiclone > You read bios? Check my BIO. But if you are too lazy you send 10 million ISK per miner you wish to register in a Mail to me (the AGENT of HIGH Sec) and I give you a Permit valid for 1 full year per 10million isk. So 8 miners would be 80 Million ISK
Aurora Noxious > I don't pay for anyone else, they want it they can get their own
Zopiclone > Sounds like you are that CEO that only cares about themselves but fair enough.
Aurora Noxious > or a CEO that is the only one that currently plays

To Zopiclone's delight, Aurora expressed an interest in purchasing a mining permit. Mysteriously, she now had access to the 10 million isk required for one. However, Aurora didn't see any need to buy permits for the rest of her corp--including her own child. Mother of the year, folks.

Despite the bitterness of a few minutes earlier, the two shared a moment of appreciation for the Code.

With that, the business was wrapped up. Zopiclone graciously accepted Aurora's isk. 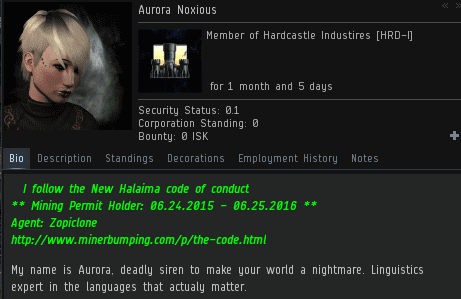 Although Aurora got a mining permit, she soon found that she was no longer welcome in her own corp, and she quit. Hardcastle Industires will be forced to navigate highsec without the benefit of her leadership. It's a good thing they have the New Order to lead them.
Posted by MinerBumping at 20:12