The verdict is in.

For the past few years, CCP has struggled to reverse--or even slow down--the decline in EVE players. Lacking the will or resources to add new content to an aging game, CCP relied primarily on implementing nerfs to highsec aggression. Instead of patches with new features (or much-needed fixes to old features), we got a safer highsec. Carebears rejoiced, predicting a flood of theme parkers from gentler, friendlier games.

Unfortunately, they didn't show up. Subscribers continued to fall. No matter how far CCP went to make highsec safer, it was never enough. Even the carebears who already populated highsec failed to appreciate the nerfs to aggression for very long, since they always managed to find a way to get themselves killed.

Then, during the latter half of 2014, the Great Idea came into being. At last, someone came up with a way to reverse the decay. New player retention was going to be supercharged. Subscription numbers would skyrocket. CCP would find itself drowning in piles of money. EVE was saved!

The Great Idea was the removal of awoxing. Once intra-corp friendly fire was made illegal, highsec corporations would no longer fear being invaded by awoxers. Rather than being suspicious of newbies, corps would throw open their doors and welcome them in. A torrent of new players would leave NPC corps and fill the ranks of player corporations. They would build ties to the community, get a more interactive experience, and they would (gasp!) give CCP money instead of letting their trial accounts expire. Finally, a way to retain new players.

The general EVE population marveled at the genius of it all. The enthusiasm was infectious. Nor was it limited to the carebears and their traditional apologists. Indeed, one of the CSM members who supported the idea most strongly was Sion Kumitomo, a GoonSwarm candidate. Even The Mittani himself, sponsor of the Gallente Ice Interdiction, Hulkageddon Infinity, and Burn Jita, was among the very first to advocate the Great Idea.

CCP, of course, found it irresistible. Not only was the awox removal guaranteed to boost revenues, not only was it the solution to all their financial worries--it was also a no-effort solution. Making friendly fire illegal was what DJ FunkyBacon refers to as "Delete Key Game Development": No need to spend huge amounts of time and resources developing something new; simply get rid of something old.

The CSM, reflecting the attitude of the players who elected them, solidly supported CCP and its plan to give life to the Great Idea. Only the grouchy, grumpy ol' FunkyBacon had the rudeness to stand in the way of their enthusiasm. He forced them to at least recognize the need for an on/off switch for friendly fire. Ugh. Now CCP had to spend a miniscule amount of time and effort to code in a toggle switch. But no matter. In a few months, it would be ready.

Then, of course, there was the fanatic leader of the New Order, James 315. With characteristic unreasonableness, he criticized the Great Idea instead of embracing it. Annoyingly, he didn't think the removal of awoxing would improve player retention or boost EVE subscriptions. He even explained exactly why it wouldn't work. What a jerk!

On February 17, 2015, the Tiamat expansion went live. The Great Idea took effect immediately. It was as if each cell in the decaying body of EVE Online was baptized in a fountain of youth. The game was restored, filled with new vigor. The NPC corps no longer imprisoned the new players. They were free! Highsec player corps swelled with new blood, new life. Retention rates and subscription numbers and revenues burst through the old ceilings. CCP headquarters flowed with champagne. There was dancing in the streets of Reykjavík. There was... 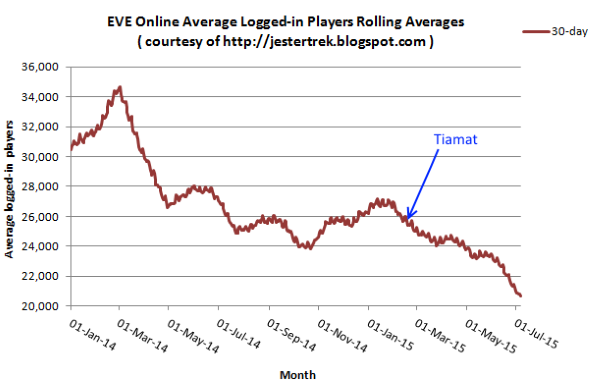 For reasons unrelated to this subject, none other than Ripard Teg recently compiled statistics on the EVE population. The number of logged-in players was used in this chart because CCP no longer publicly discloses detailed stats on EVE subscription numbers. I simply added the Tiamat release indicator to Ripard's chart.

EVE's population has declined over time for a host of different reasons: The age of the game, the lack of new features, the tightening of restrictions on bots and multiboxers, fatigue from broken sovereignty mechanics, etc. The removal of awoxing did not reverse the trend, stop the trend, or even slow it down. Nearly five months later, we can say that it had, in fact, no effect whatsoever.

It's no particular mystery why the awox nerf didn't boost the number of new players being recruited into player corps, or improve player retention, or increase the EVE population. As I wrote several months ago, recruitment policies toward new players never had anything to do with intra-corp friendly fire. Highsec corps either (A) let in anyone and everyone, (B) restrict newbies due to elitism, skillpoint requirements, etc., or (C) restrict newbies due to spying/infiltration concerns. The awox nerf had no impact on any of these considerations. It merely removed a style of gameplay from the very small number of EVE players who performed highsec awoxes.

As a side note, as I wrote previously, the removal of legal friendly fire did nothing to encourage recruitment of new players to the lowsec/nullsec/wormhole corps that provide real content to players. As for highsec, if people avoid joining large player corps, it's so that they can evade wardecs, not awoxers.

As an additional side note, it's worth considering the situations in which EVE's numbers do improve (temporarily). Most recently, this would include the publicity about the battle of B-R (a big nullsec fleet battle) and the "This is EVE" trailer (which almost exclusively highlighted nullsec fleet battles). New players join EVE, and then they quit within a month. Critics say CCP has sold these players a bill of goods that they couldn't deliver. Of course. That's because CCP does essentially nothing to get new players into nullsec so they can experience said nullsec fleet battles. They focus on making highsec comfortable and highsec corps open, assuming that highsec mining is some kind of gateway drug to nullsec PvP. It isn't. Highsec PvE corps don't grow up and move to nullsec. They stay in highsec. Their players stay in highsec, too, unless they quit or someone destroys the corp with a wardec--after which the newly liberated players might try something different.

CCP will shortly release "FozzieSov", the long-awaited overhaul of nullsec sovereignty mechanics. Most observers believe this will generate new interest in nullsec in the short-term while pilots "play with the new toy". Then players will either find they enjoy the new system or they'll all get bored with it.

Regardless of whether FozzieSov succeeds or flops, CCP should have designed changes to the sov system years ago. They've known for years that it was broken. Why did they wait until now? Because they had no sense of urgency. They were convinced that they could improve the game and boost revenues by making highsec safer, and by deleting features like awoxing.

That would have been so easy, if only it had worked.
Posted by MinerBumping at 18:41