Yes, We Can Kill Your Freighter, Part 3

Previously, on MinerBumping... It began with a freighter full of blueprints. 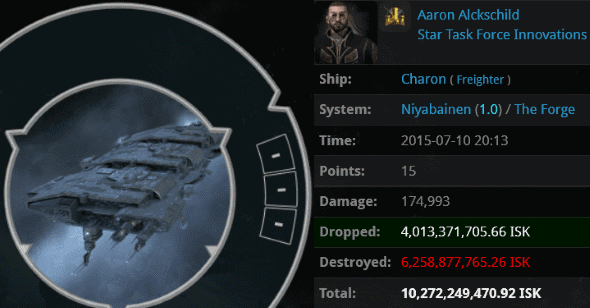 Aaron Alckschild's dismissive attitude turned to horror when he learned that his freighter could, in fact, be killed. When Aaron begged for the return of his precious BPOs, Enia McCool and Multiple Inbound Supercaps had to explain that only half of a ship's cargo survives. The distraught carebear frantically negotiated for the remaining half.

The bot-aspirant felt his ignorance deserved to be rewarded with a discount. That's not the way the Code works, however.

Luckily, Aaron's net worth was climbing rapidly over the course of the conversation. He now had almost enough money to buy the blueprints that had survived the gank.

Aaron was engaged in an internal tug of war between his desperation and his greed. One moment he would beg and offer more isk; the next moment he would try to get a better deal.

Which side of Aaron's psyche would prove stronger?

However, at the last minute, the deal was jeopardized by unforeseen obstacles.

The Talos BPO was off the table. The gankers were already putting it to good use. (Maybe this explains all the Taloses we've seen lately?)

The carebear was despondent. The Talos BPO was one of the most valuable items in his collection. The collection that used to be his, anyway.

The carebear was bewildered by the gankers' wealth. He had no idea that EVE players could make money by actually playing the game, rather than mindlessly grinding for years in highsec.

In any case, the exclusion of the Talos BPO put Aaron in a tight spot. The price of 3.5 billion for the narrowly defined set of BPOs didn't seem so attractive. But Aaron needed those blueprints badly.

Alas, the carebear suffered from buyer's remorse from the very moment he accepted the contract.

Even now, with no leverage whatsoever, Aaron was eager to get more out of the deal. What an isk-crazy carebear.

There was no end to Aaron's lies. A few minutes after declaring himself broke, he offered to buy more blueprints. But the blueprint business was closed, for now. Our heroes had destroyed billions of isk worth of contraband, acquired a useful Talos BPO along with some miscellaneous blueprints, and made a profit from a large sale to the gank recipient. Most importantly, they taught an arrogant freighter pilot some valuable lessons about EVE game mechanics and humility. All in a day's work.
Posted by MinerBumping at 20:46