The Day the Miner Fought Back, Part 1

The New Order has grown by leaps and bounds. Now even the farthest reaches of New Order space are patrolled by our Agents. An elite detachment consisting of Agents Get Well Soon, Mark Eting, and Lisa Tears set out on an expedition to the Genesis region. They were prepared for whatever they might find in the boondocks of highsec. 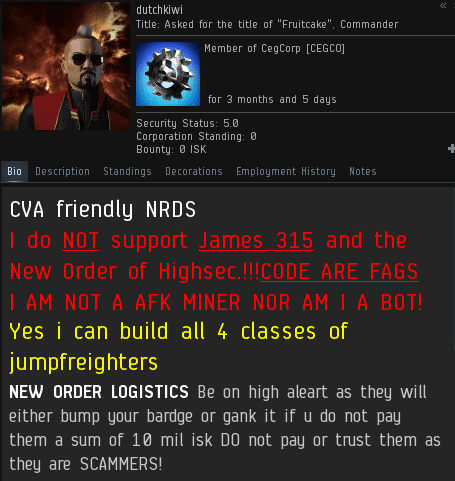 Our heroes discovered an Orca piloted by dutchkiwi. A quick background check revealed him to be a rebel. The carebear claimed to be affiliated with a nullsec alliance. It was odd, really: Though he was friendly to CVA, he wasn't friendly to the New Order, which ruled the space he actually lived in. Alongside dutchkiwi's Orca was his Hulk alt, Pureminer Pava. 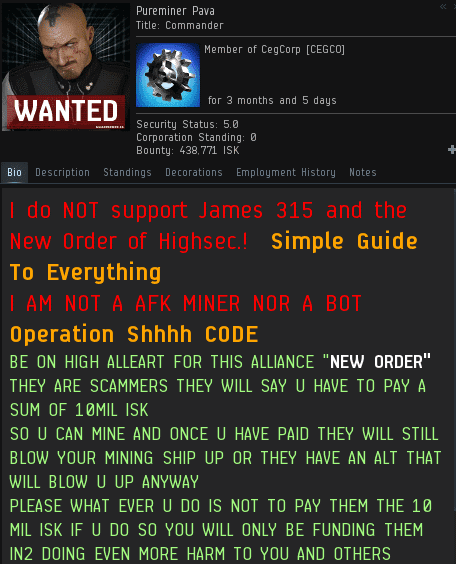 That's when things got interesting. As soon as Pureminer detected a New Order presence in local, he swapped out his Hulk in favor of a combat ship, a Stratios. He intended to ambush our Agents with a counter-gank! 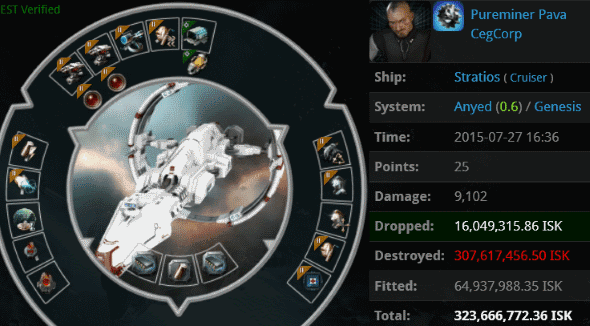 Pureminer fell victim to something he couldn't possibly have expected: A counter-counter-gank! Our Agents landed on grid and tore apart his disturbingly fail-fit Stratios.

Despite Pureminer's rebellious attitude, our Agents were optimistic. If a carebear is alert enough to watch for gankers and willing to go to the effort of setting a trap, he might have a little Gallant left in him. Many "active" rebels have joined the New Order because they realize that they enjoy playing the game more than isk-grinding.

On the other hand, some rebels completely buy into the notion that our Agents can only shoot ships that can't shoot back. They think the New Order is a bunch of pushovers--rather than elite warriors, as is actually the case. Rebels with this attitude don't handle it well when they're beaten by the New Order.

It wasn't long before our heroes wondered if Pureminer was one of those rebels.

Early indications were negative. Even when told to calm down, the miner remained in an angry state.

Pureminer Pava was indeed one of the carebears who was willing to try PvP but didn't like it very much. The experience had only solidified his twisted love for an all-PvE playstyle.

Deprived of his comfort zone, Pureminer began spewing Miner Bingo quotes and other standard-issue spin in local chat. The carebear's Stratios was "free", presumably just like everything else he'd earned from grinding.

Insecure carebears like to switch over to their alts mid-conversation and shed tears from multiple characters. dutchkiwi, his Orca pilot, took point. 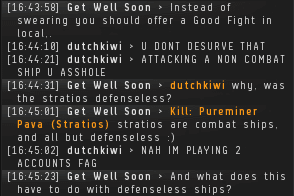 Then the carebear did something very revealing: He played the "you only shoot ships that don't shoot back" card even though our Agents had ganked his combat ship, which he was actively attempting to use in an ambush against them. Agents, remember this lesson well. There are no circumstances under which a carebear won't play the "you only shoot non-combat ships" card. It is meaningless. It's merely something rebels say to make themselves feel better about the New Order's obvious superiority.

The miner quickly abandoned any attempt to explain why his combat ship was a non-combat ship. He began desperately scraping at the remains of the bottom of the barrel. "I have kill rights, and I will use them!"

Our Agents couldn't escape the feeling that maybe Pureminer Pava wasn't Gallant material after all. The carebear might not be cut out for the New Order, but could he at least be persuaded to calm down and buy a mining permit?