Space Lawyer: The Next Generation, Part 2

Previously, on MinerBumping... Agent Kalorned was on a routine patrol in the Gamis system when he encountered Allesdair Crendraven, an overeager Iteron V pilot who didn't see the need to purchase a permit. The Iteron V and its cargo were bumped for a few minutes and then destroyed in a righteous gank. But Allesdair was in no mood to offer a "gf" in local. Instead, he questioned the legitimacy of the Code enforcement action from every angle.

Things got serious in a hurry. The space lawyer suggested he would take the matter straight to the top.

There are those who believe the Code once contained a provision barring carebears from petitioning our Agents. According to some of the oldest copies of the Code, threatening to file a petition was an automatic Red Pen offense. The intent, presumably, would have been to lessen the burden on EVE's GMs, who would otherwise need to handle tens of thousands of frivolous petitions. If such a Code provision existed, it was removed at the direct request of CCP. For now, it must be considered apocryphal.

Before Allesdair set to work on his petition, he wanted to know why he'd been ganked and podded, rather than simply bumped for the duration of the convo. 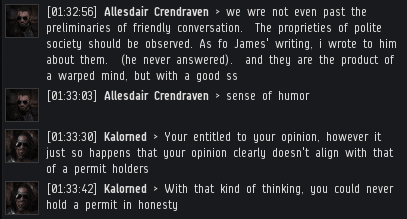 Kalorned explained that Allesdair had already revealed enough of his true nature over the course of the convo to condemn him. 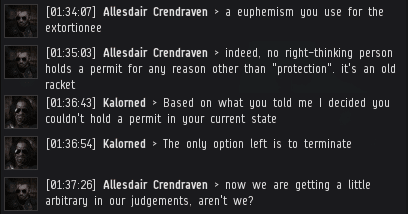 The space lawyer wasn't having any of it. Despite his carefully crafted arguments and slick persona, he couldn't resist the use of Miner Bingo quotes. Allesdair wasn't nearly as smooth as he thought he was. 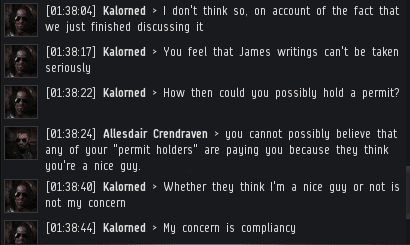 The former Iteron V pilot had the gall to question the motives of every permit owner in highsec. Kalorned maintained his composure. He didn't get into the business to gain popularity; everything he did was for the sake of the Code.

Allesdair continued to indulge in the most heretical of ideas. He aimed at nothing less than to undermine the very foundation of modern highsec society.

It was clear that Allesdair couldn't win an argument with a New Order Agent. And so he once again raised the specter of the nuclear option. 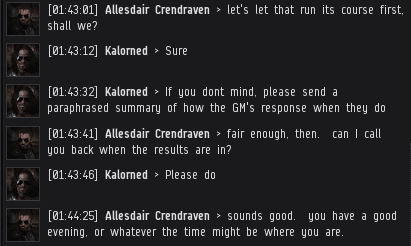 Anyone who has been to Gamis knows that Kalorned has nerves of steel. Unmoved, the Agent invited Allesdair to tell him how the petition fared.

A week later, Kalorned remained quite free from any disciplinary action by the GMs. He hadn't heard a peep from CCP--or from Allesdair. Time for an update. 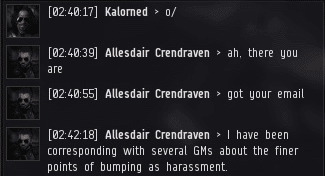 The moment of truth arrived. Allesdair confirmed that he'd spoken with "several GMs". And what was the current state of bumping law?

Grudgingly, Allesdair had to concede the legality of Kalorned's enforcement of the Code. He disagreed with CCP's decision on the subject, but there was no denying that the decision had been made. 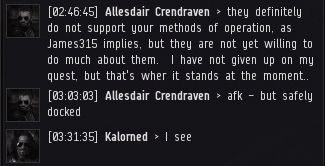 A good space lawyer never gives up the fight. One day, Allesdair hoped, the GMs would become willing to do something about the Code. For now, he would do his AFK'ing while confined to a station. The space lawyer bides his time...
Posted by MinerBumping at 18:01