A Snowball's Chance in Highsec, Part 2

Previously, on MinerBumping... Agent Lenda Shinhwa ganked Captain Flin-Flin's Retriever. The good news was proclaimed in local by Lenda's herald, Agent Harlequin Croft. Smarting from the loss, Flin-Flin demanded that Harlequin meet him at the station if she wanted to sell him a mining permit. It was obviously a trap. Harlequin had never won at PvP before, and was armed with only a Probe-class frigate equipped with a Festival Launcher and a civilian gun. But she had the Code on her side, so she fearlessly went to the station. 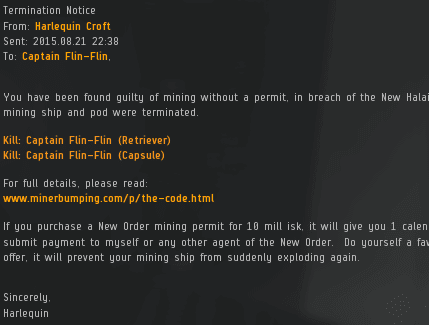 Harlequin got Flin-Flin's attention by celebrating Lenda's success in local chat, but she had irked him in two other ways, too. As a herald, it was Harlequin's responsibility to supply the carebear with the necessary paperwork following the destruction of his barge.

Secondly, Harlequin had looted Flin-Flin's wreck while Agent Lenda waited out the global criminal timer. Harlequin was now flagged as a suspect and freely attackable by all--especially Captain Flin-Flin, who re-shipped into a Vexor Navy Issue and waited patiently at the station.

All of our Agents are valiant. The New Order is known as much for its bravery as its skill. Harlequin's frigate landed at the station directly on top of the rebel's faction Vexor. She knew that Flin-Flin had no intention of buying a permit; he'd prepared an ambush. So Harlequin struck first, and struck hard. She began pelting him with snowballs.

The Vexor Navy Issue locked Harlequin's Probe and returned fire. The shields on our Agent's frigate began to give way. Now it was time for Harlequin to turn up the heat. She let loose with her Civilian Gatling Autocannon. 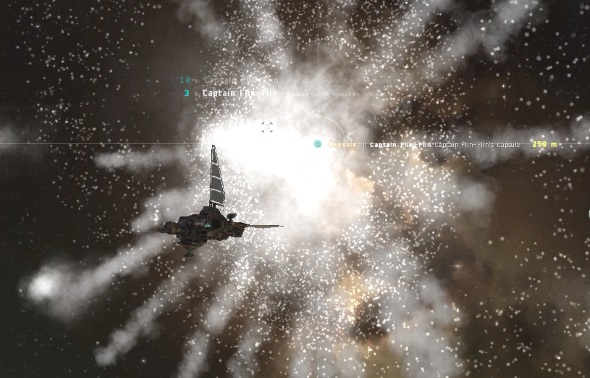 KABOOOOOOOOOM! Victory for the New Order! 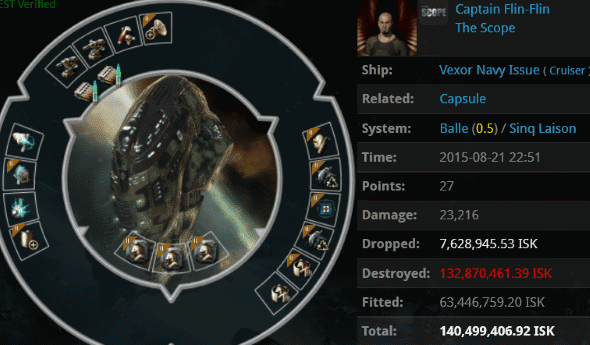 "Meh, seems made up," you say? The API-verified killmail doesn't lie, and neither do I. Captain Flin-Flin's Vexor Navy Issue was completely destroyed. Agent Harlequin Croft was pleased. The Code was as powerful as she'd always known it to be. She defeated a faction cruiser using snowballs! 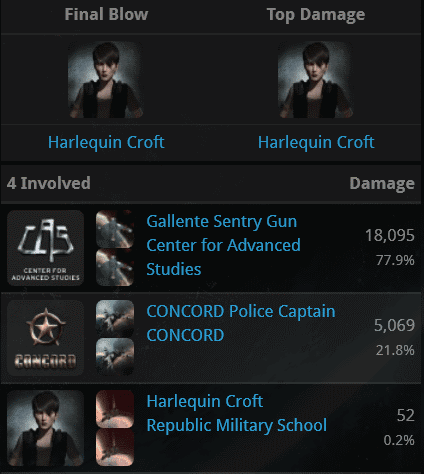 Oh, and there was one small complication worth mentioning. 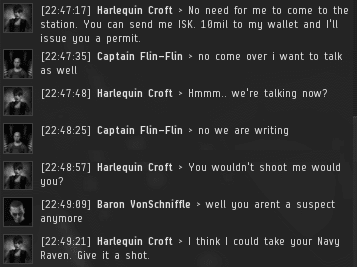 As Baron VonSchniffle noted, Harlequin was no longer flagged as a suspect. It had been a little over fifteen minutes since Harlequin looted Flin-Flin's Retriever wreck. But carebears, as we all know, seldom pay attention to local. The miner didn't even notice that it was a CONCORDable offense to attack Harlequin--even if she provoked him with snowballs.

The Crimewatch rules were meant to make highsec carebears completely invulnerable to aggression mechanic trickery. Yet the bot-aspirants continue to die. Naturally, they still blame CCP and demand that highsec be made even safer. 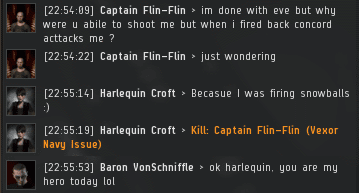 Maybe the miners should get together and petition CCP to remove snowballs from the game? They're not a very intuitive mechanic. 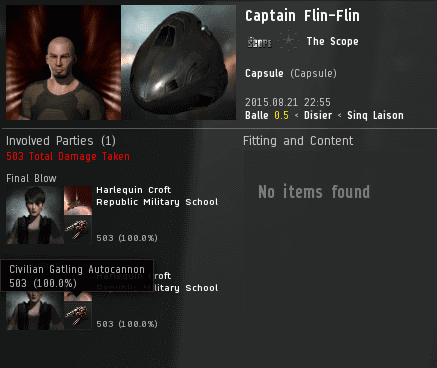 Flin-Flin was completely stunned. In shock, he didn't even bother moving his pod. Four minutes later, Harlequin earned another killmail by attacking it with her civilian gun. And snowballs, of course. (The earlier screenshot shows her Probe attacking the pod, not the navy Vexor. Dramatic license.)

The dumbfounded carebear had been completely outclassed. He declared that he was quitting EVE forever. Would that jeopardize the sale of the mining permit he'd promised to buy?