Previously, on MinerBumping... Agent Tisiphone Dira supplied content-starved highsec carebears with a reason to continue playing the game. More than that, she lent her gank recipients a sympathetic ear and gave them good advice. But not everyone she helped showed gratitude. Former Cheetah autopiloter Zulu Dorn exploded in anger.

Apparently Zulu had imported some anti-Goon sentiment from nullsec, or perhaps from elsewhere in highsec. 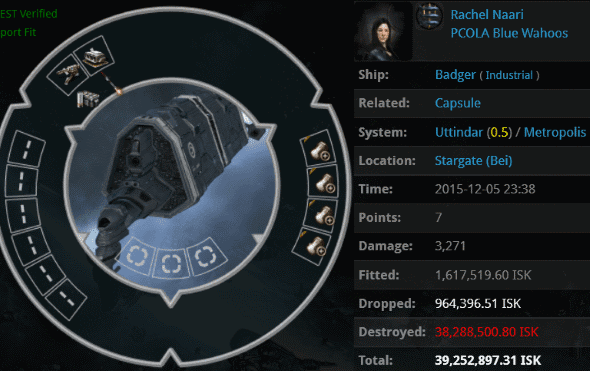 Tisiphone was undeterred. She resumed her mission to help the autopiloters. Rachel Naari's questionably fit Badger was intercepted. Tisiphone's Vexor triumphed in the 1v1 that followed--though the Badger was a ship that could shoot back.

Rachel bristled, especially at the loss of her 18 million isk pod. Tisiphone knew just how to handle this dispute. She redirected Rachel's focus from what she'd lost, to what she stood to gain from the experience.

Rachel had trouble shifting gears. She was a wallower.

Stereotypical depictions of therapists have them saying things like, "I'm sorry, but our hour is up." Tisiphone wasn't that kind of therapist. When she felt a carebear was on the verge of a breakthrough, she cleared her calendar and stuck with it, no matter how long it might take.

One and a half hours after the kill, Rachel and Tisiphone were still working. Rachel couldn't see what was wrong with autopiloting.

The session continued. It became a test of wills between space patient and space doctor. 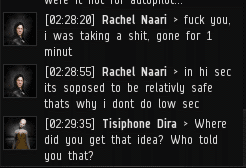 After an additional hour of talking things over, Rachel made a breakthrough. She was prepared to admit that she'd violated the Code by going AFK to use the bathroom without an Agent's permission. She's still getting her life together.

One fine day in Uttindar, Tisiphone chalked up another victory during a major skirmish with a fellow EVE player.

Curiously, Thee Goat seemed to think he had won the battle. 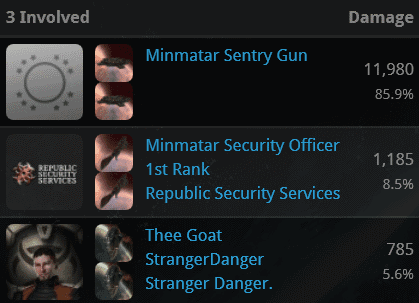 Thee Goat had indeed gotten onto a killmail. However, he'd failed to actually disrupt Tisiphone's ganking operation; she successfully killed her target before the stargate sentry guns took her down.

Thee Goat fancied himself an Anti-Ganker. Despite failing, he thought he was a winner. Could Tisiphone free him from his delusions and help him embrace the Code?