One of the great things about a competitive PvP sandbox game is that it allows people to make use of all sorts of different skills. Market savvy, for instance: 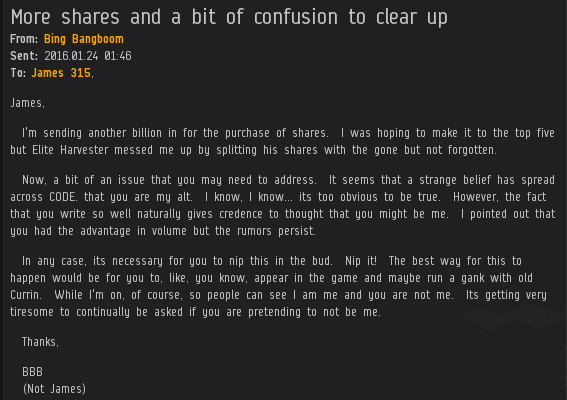 I hold the curious distinction of being, by far, the most speculated-about player in EVE when it comes to being someone's alt or someone else being my alt. Though I have only ever had one account, there's an element of truth in the speculation when it comes to my Agents. As the duly-elected Saviour of Highsec, I am the living manifestation of the Code. Wherever my Agents enforce the Code, there I am also.

Bing Bangboom has renewed his slow, steady climb up the shareholder ranks. His latest purchase of 1,000 shares sent us over the 851 billion isk mark and earned him a Supreme Protector's Tip of the Hat™.

Meanwhile, Tora Bushido submitted an order for 1,500 shares, adding to his surprisingly healthy supply of New Order stock. This sent us over the 852 billion isk mark and earned Tora a Supreme Protector's Tip of the Hat™.

Finally, Alexander Sikorski joined the ranks of the business world's elite when he signed on for 315 shares. Alexander sent us over the 853 billion isk mark and earned a Supreme Protector's Tip of the Hat™.
Posted by MinerBumping at 18:35