How a Carebear's Nerf Proposal Is Born

Over the years, we've seen quite a few carebears and carebear apologists ask CCP to nerf highsec aggression--One More Nerf™. We know these misguided individuals are ultimately motivated by the desire for 100% safety, but who are they? Where do they come from? Today, we'll witness the origin of just one of these theme parkers. 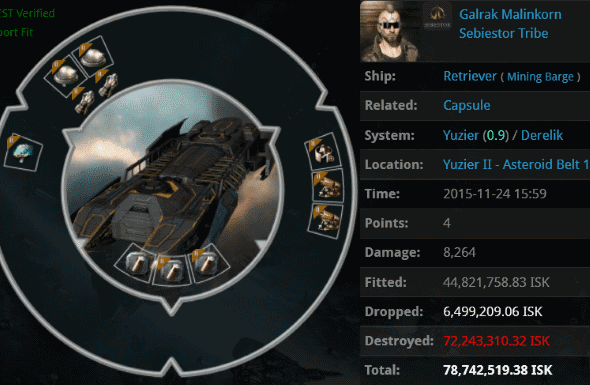 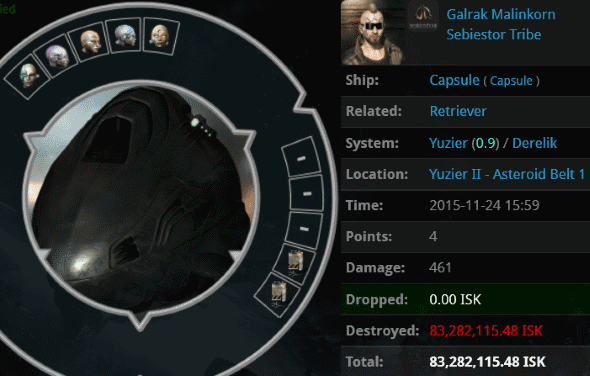 After losing his Retriever to Agents Keraina Talie-Kuo and Krominal, they finished off his Capsule. Following their round of PvP, Galrak was sent a form EVEmail instructing him to read the Code and pay 10 million isk.

Galrak sent Krominal a response that strongly implied he was not going to buy a permit.

Galrak reserved his worst sentiments for Keraina Talie-Kuo, who had been credited with the destruction of Galrak's rather unremarkable pod. Having sent two permabannable EVEmails, Galrak went silent. But he never stopped thinking about that 83 million isk pod. 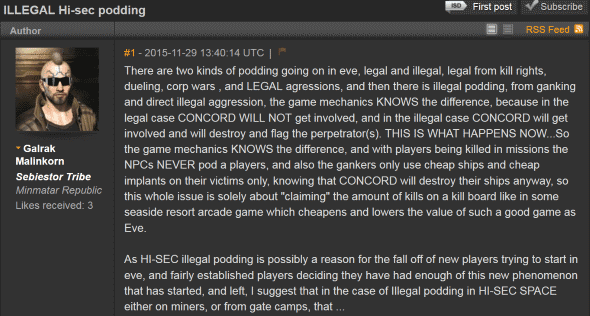 Five days later, Galrak reported to the official EVE forums to offer the fruits of his meditations. Considering the loss of his pod in highsec to be a defect in the game, he posted a thread in the "Issues, Workarounds & Localization" subforum. The substance of Galrak's proposal was as follows:


I suggest that in the case of Illegal podding in HI-SEC SPACE either on miners, or from gate camps, that ...

1. The podded entity is "resurrected" back at the LAST station it UNDOCKED from, with its complete compliment of implants if any.
2. The ship with all its modules and rigs if any, replaced there too.

ie for the victim player it is as if the incident never happened.

In other words, Galrak's suggestion was to automatically reimburse players who get podded. To compensate for this change and balance things out for the ganker, Galrak added:


As for the perpetrator, as CONCORD will destroy the ship but at the moment doesn't pod the capsuleer, I suggest

1. as punishment for such an action, the game CAN pod the perpetrator and resurrect them back at their "HOME" station with a NEW bare clone, and a rookie ship. (like it does with the victim now)
2. That NO kill rights are issued for the incident to the victim, and no criminal flag is issued to the perpetrator, ie no need for revenge.
3. There is no ship debris at the point of the incident of either the perpetrator or the victim.

Thus, if a ganker manages to succeed in podding someone in highsec, the victim gets all their stuff back, and the ganker loses his own pod. Fair enough?


hopefully this action will bring back established players who may have lost a lot through illegal ganking and got fed up and left, and also, wont deter new players from staying on after their trial period.
this way the victim isn't at a loss for this incident, and the perpetrator just gets a slap on the wrist off CONCORD.

Galrak blamed gankers for the decline in EVE subscriptions. I doubt it. Interacting with people like Galrak Malinkorn, on the other hand, probably isn't EVE's biggest draw. 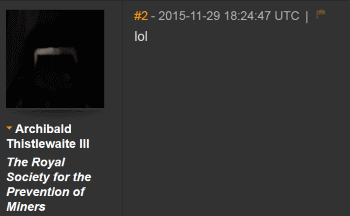 Galrak's "bug report" in the Issues, Workarounds & Localization subforum didn't go over well. Galrak realized that he'd posted his idea in the wrong place. So he created an exact copy of his post and put it in the "Player Features and Ideas Discussion" subforum, where One More Nerf™ proposals belong.

But even there, Galrak's idea met with mockery in reply after reply of players disagreeing with him. Time for Galrak to absorb the constructive criticism.

Galrak laughed it off. On public record now, he spared his fellow players any talk of cancer or gas chambers.

The carebear's good humor didn't hold up for very long.

After a bit more feedback, Galrak decided he'd had enough. Galrak's great effort to change EVE's game mechanics was at an end. But as long as there are carebears losing Retrievers in highsec, there will be more proposals like this one.
Posted by MinerBumping at 18:27