Previously, on MinerBumping... Agent Tisiphone Dira was too experienced an Agent to be surprised by the number of gank recipients who were suffering from problems unrelated to EVE. After all, the Code filters out all the Gallants, leaving only Goofuses to be ganked. Tisiphone's latest project was Thee Goat, who ineffectually added his 5% damage to one of her gank Vexors. Thee Goat declared a victory for Anti-Ganking. 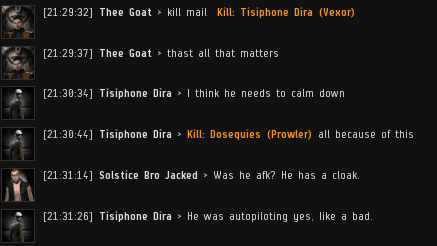 By cross-referencing corp names, the crafty Agent deduced that Thee Goat was connected to one of Tisiphone's earlier kills.

Thee Goat's revenge was not going to be another one of those short-lived vendettas we see from gank victims who make a few idle threats and leave. From now on, Thee Goat would shadow Tisiphone's every move, making her gank operations impossible.

Then again, maybe not.

As time went on, Tisiphone began to doubt the qualifications of her aspiring arch-nemesis.

A few minutes later, Thee Goat admitted that his actions were indeed motivated by the loss of the Prowler.

Thee Goat's campaign to stop Tisiphone Dira only lasted a few more minutes. Carebears can only think about vengeance for so long before the siren song of isk-grinding lures them away.

firegod311666's decision to autopilot in a Leopard resulted in the loss of yet another member of the increasingly endangered species of shuttle. There are still plenty for sale, but it's hard to believe that there used to be one for every EVE player.

From the outset, Tisiphone could tell that firegod311666 lacked maturity. Now that he was back at his keyboard, she could help him. The New Order to the rescue!

The carebear added some variation of "lmfao" to most of his comments, but Tisiphone could tell he was hurting. In a Code-compliant context, humor is a source of great fun and even wisdom. But a carebear's sense of humor often comes from a place of deep pain, even anger. 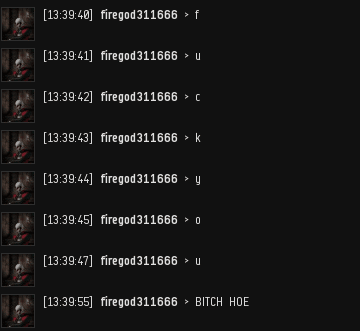 Surely this wasn't what CCP had in mind when they created the private convo system.

So far, firegod311666 wasn't making any real-life death threats. He fell squarely within the "normal" classification for anti-Code folks.

Slowly but surely, the carebear inched his way out of the normal range.

It's a tough thing, but there are times when our Agents almost wish that the carebears remained away from their keyboards.

At the conclusion of their talk, Tisiphone felt that only slight progress had been made, if any. firegod311666 still had a lot of growing up to do. On the plus side, he'd been punished for his Code violation and had been exposed to a great role model in Tisiphone Dira. Who knows? In a few years he might be a model Agent of the New Order.
Posted by MinerBumping at 18:32