Previously, on MinerBumping... CODE. Internal Affairs chief Kalorned found himself embroiled in the shadowy world of black market permits, illegal mining, and diplomatic back-channeling. Primal Ascendancy leader Lord Connir did everything he could to steer his alliance away from an imminent war with the New Order. The matter escalated when Agent Latir Darkspear, who allegedly supplied the Darkspear miners' permits, came under investigation.

Latir claimed he was suffering from "super lag" and was having difficulty uploading a screenshot. Kalorned wasn't willing to let it go. A screenshot of Latir's wallet was absolutely necessary to corroborate Latir's story about the timing of the permit purchases.

At last, Latir produced a screenshot. Kalorned hoped that this would be the evidence he needed to put the whole matter to rest.

Alas, it was not to be. The screenshot did not include any actual information.

Our Agents have often seen in the past that "technical difficulties" arise when someone is trying to pull a fast one.

The moment of truth had arrived. Either Latir Darkspear would produce the screenshot of his wallet, or his future in CODEdot was in serious jeopardy.

Meanwhile, Lord Connir was on pins and needles. His alliance was on the brink of a war that could destroy everything he'd built.

Always protective of its reputation, it is the policy of CODEdot to avoid even the appearance of impropriety. Unable to produce a screenshot of his wallet and hoping to avoid scandal, Latir Darkspear had no choice but to resign his commission as a member of the alliance.

This left Lord Connir in a sticky situation. Since the alleged permits could not be validated by Latir Darkspear, Lord Connir's alliance was technically harboring unlicensed miners. The only other party who could prove the validity of the permits would be the Darkspear miner who bought them. 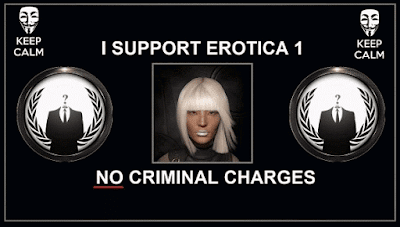 With no means of ensuring the integrity of the preexisting permits, Kalorned suggested that Lord Connir buy new permits for the Darkspear miners himself. 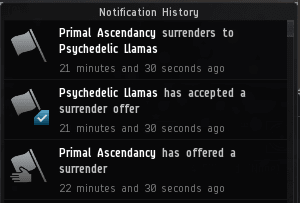 When well-meaning people work together in good faith, anything is possible. The crisis was averted without the need for bloodshed. 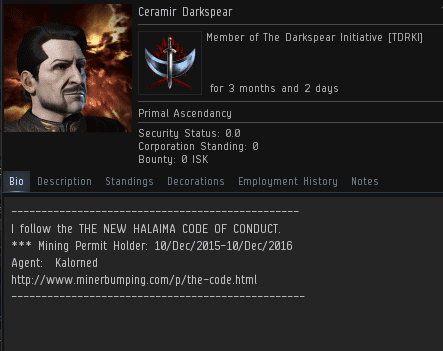 Now all the Darkspear miners had permits issued straight from Kalorned himself.

Peace in our time. Kalorned reflected upon the case in his journal.


"Being an Agent is not always easy; it takes great personal resolve, conviction, and longevity to manage the great burden. Negotiations for ending wars can be bad enough, but toss in bad Agents to the mix and you can truly develop some incredible situations such as the one above. Agent Darkspear unfortunately didn't quite have what it takes to last. While we can only hope he will continue to fight for the Code as he indicated he would do outside the alliance, I unfortunately have my doubts given his lack of activity and illicit side mining. With that being said, for every fallen Agent there are 10 more to take their place, and in that I feel we can take great comfort."

At the end of the day, the system worked. The Code was upheld. And the New Order showed once again why its Agents have the skill and moral legitimacy to rule over everyone in highsec. Government doesn't get any better than this.
Posted by MinerBumping at 19:07