Every game has a learning curve, but EVE is so complex that it's often said to possess a learning cliff instead. Part of why the New Order exists is to help new players ascend the cliff: Rather than making a lot of expensive mistakes, they can learn the game by reading the Code. I advise potential EVE players to read the Code a few times before they even begin downloading the EVE client (or going to Best Buy). Why? Because if they don't feel they can meet the expectations for their conduct as set forth in the Code, then EVE is probably too demanding a game for them--at least, at the present stage of their mental and emotional development. Better to work at meeting realistic expectations than to repeatedly fail at unrealistic ones. 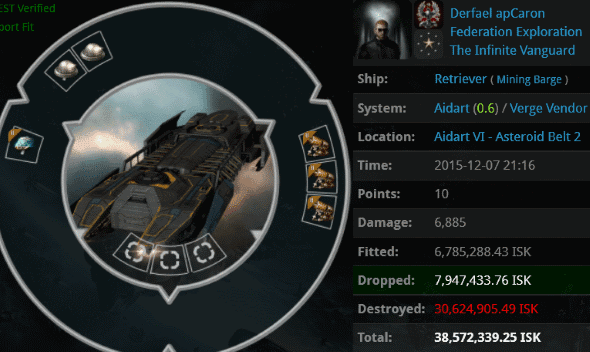 Out on a routine patrol in Verge Vendor, Agent Snigie Audanie was astonished to find a Code-violating miner. His instincts are well-honed, though, so he recovered quickly from his astonishment and killed the miner. It turned out that Derfael apCaron held himself to a pretty high standard, and he wasn't afraid to let the world know it: 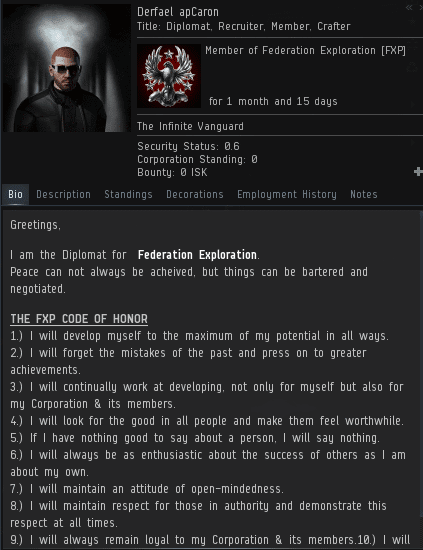 ...And it goes on. Look at those rules. I bet you didn't realize what a demanding job it is to mine AFK in highsec. And as the diplomat for Federation Exploration (FXP), Derfael had an especially heavy burden to carry. Agent Snigie sent Derfael a quick mail about Code compliance. Now Derfael had the chance to either live up to his expectations, or crash and burn.

Derfael's reply was truly ominous. The man had acquired a very particular set of skills, ones which Snigie could only hope wouldn't be deployed against him. For all Snigie knew, this guy had graduated at the top of his Navy SEALs class.

Snigie wasn't intimidated, though. Normally the miner would be told to calm down. However, Snigie had a hunch and tried an experimental new approach for dealing with internet tough guys. 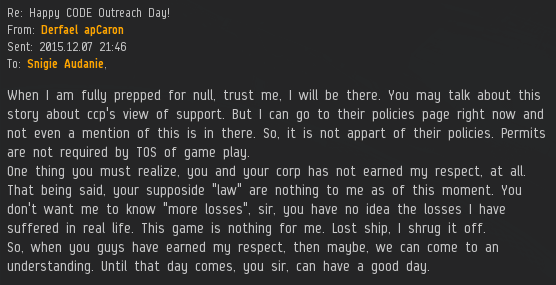 Success. Derfael's diplomatic skills weren't exactly setting world records, but he toned down his threats. Snigie felt comfortable enough to ask Derfael to take a first step toward obeying the Code by offering a "gf".

What Derfael didn't realize is, in EVE, fights are meant to be one-sided. There's no counter to the Code.

Negotiations were breaking down quickly. Derfael resorted to the "I have a stockpile of mining ships in case they all get ganked" line.

When Snigie asked why he wasn't mining in one of his spare ships from the alleged stockpile, Derfael made an excuse and broke off all contact. A few days later, Derfael was relieved of his duties at FXP and he left the corporation. 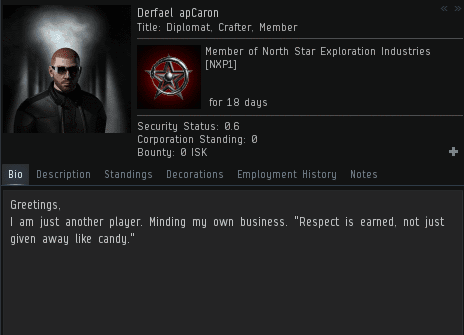 Derfael's new corp was similar to the old one, except for one key difference made obvious by his new bio: Expectations were far, far more realistic.
Posted by MinerBumping at 02:04