The True Family of Highsec, Part 3

Previously, on MinerBumping... Agent Liek DarZ killed Jaroth Kings, a non-compliant miner, and was treated to a number of impertinent remarks. Liek contacted permit-owner wabbitrage, the CEO of Jaroth's corp. In a private conference, the Agent discussed with wabbitrage what could be done about the wayward miner. Liek couldn't help but feel resistance on the part of the CEO to do what needed to be done.

Liek was as diplomatic as possible. He didn't want to make wabbitrage feel uncomfortable. And yet, both men knew that if matters weren't handled properly, a wardec was a very real possibility.

wabbitrage was in an awkward position--one that many highsec CEOs find themselves in. He didn't want to alienate his corp members or show weakness in front of them, but he absolutely could not afford to face the wrath of CODE.

The CEO had bad news: He was sure that the miner wouldn't apologize. Violent conflict seemed inevitable. However, his corp could avoid punishment if he expelled Jaroth.

In the end, the Code will unite all highsec. Until the day of final victory comes, the Code can also divide people: Cousin against cousin, brother against brother, Goofus against Gallant.

Liek DarZ had compassion for wabbitrage. The CEO was forced to choose between his real life family and the New Order family. 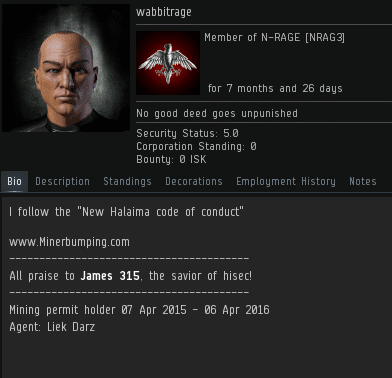 Liek urged wabbitrage to do the right thing. We all knew what we signed up for when we subscribed to EVE.

wabbitrage's sadness and regret was palpable. He couldn't bring himself to kick his cousin out of the corp. If Jaroth didn't apologize, they would be pushed to the brink of war with the New Order--a war wabbitrage couldn't hope to win.

Communications were reopened. Unfortunately, tensions had only escalated in the meantime. Agent karma balancer had learned of Jaroth's insults and was brought into the conversation. 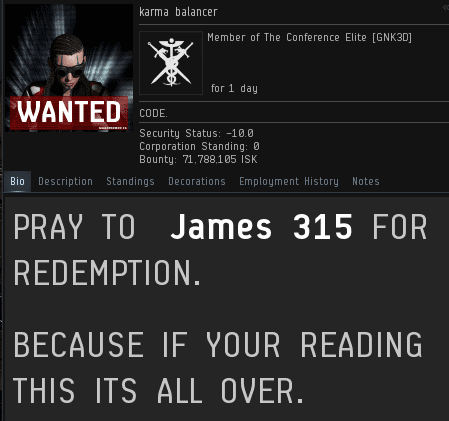 You might say that karma balancer was cast into the role of "bad cop". But there was nothing feigned about karma's indignation when she heard about the offense committed against a fellow Agent.

wabbitrage urged the Agents to believe that he had done everything possible to keep his corp compliant. He claimed he'd always been loyal.

It was a disaster, and wabbitrage knew it. The whole world he'd built in EVE was crashing down all around him.

In this desperate hour, wabbitrage could only hope against hope that there was some way out of his dilemma. The war drums were beating.