Calming Down Is Always an Option 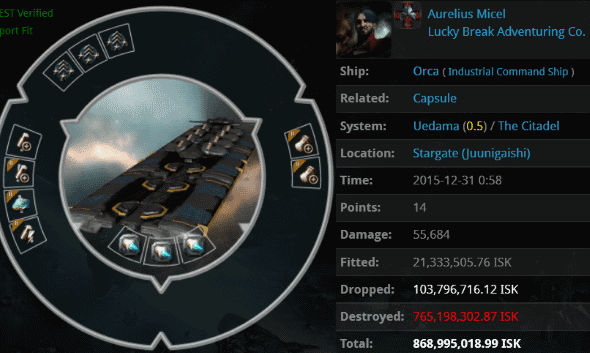 Another day on the beat in highsec. Aurelius Micel was caught trespassing in Uedama with a capacitor-tanked Orca. It didn't survive the journey. Aurelius' 900 million isk pod was also destroyed. 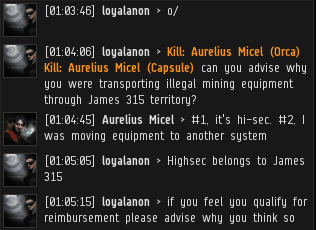 The New Order doesn't cut and run. After winning the battle against the Orca, fleet commander loyalanon personally spoke with the pilot to see if he could be of assistance. 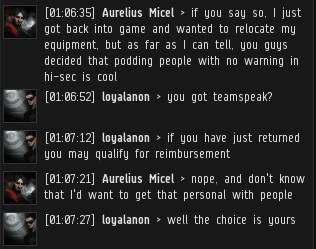 Aurelius was lucky enough to get an invite to a voice chat with loyalanon. That's the kind of thing lots of people would pay real money for, but the New Order doesn't RMT. 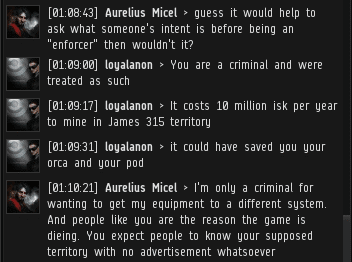 Though Aurelius claimed that he'd only just returned to EVE, he already had all of the carebear talking points down pat: We're the reason EVE is dying, according to the bot-aspirants. Paradoxically, though we supposedly have the power to kill the entire game, they question our ability to enforce our laws in highsec. 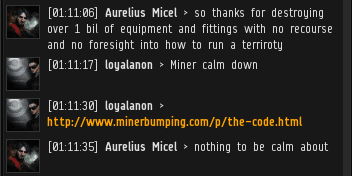 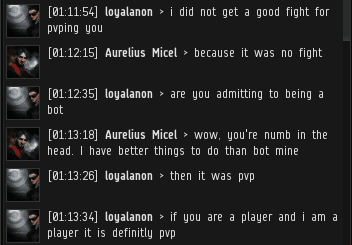 Our Agents never fail to win the argument. 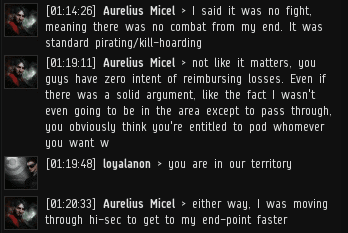 Aurelius openly admitted to cutting corners for personal gain. His chances of getting a reimbursement waned. 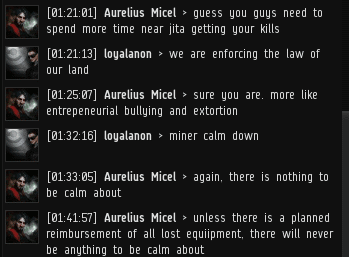 Agents and carebears approach the world in two totally different ways. From our perspective, calming down is always an option. But for the carebear, to even consider calming down requires that a lot of requirements be met. No wonder they're angry such a large percentage of the time.

Aurelius cursed the community and its elitism. Though the New Order is known for elite PvP, we're always willing to lend a helping hand. I mean, loyalanon wasn't engaged in this discussion because Aurelius is such a great conversationalist.

The carebear made no attempt to conceal his bitterness. It was like he didn't care about making a good impression at all.

Once again, the carebear condemned himself with his own words. Until now, Aurelius maintained that he had only just returned to EVE. That was his excuse for not obeying the Code. But then he suggested that he should've "heard about our shenanigans before now". Which was it?

If this were a Bonus Round, you might say that Aurelius lacked full faith. 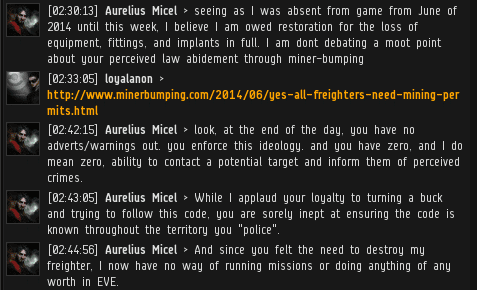 The former Orca pilot had many complaints about our great movement. Mostly he criticized us for not promoting and advertising ourselves enough. So noted. Sadly, Aurelius felt that he no longer had the ability to do anything of worth in EVE. Didn't he know about our ganker reimbursement program? 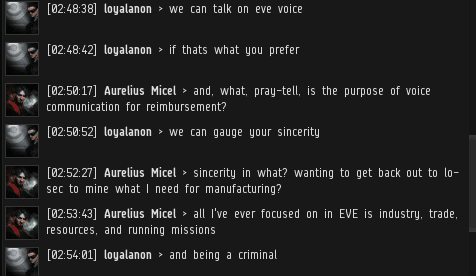 Skeptics and cynics say that the only reason someone would invite you to voice comms is for trolling and recording purposes. However, loyalanon actually invoked a well-established point of law: In court, live testimony is given more weight than written testimony. loyalanon only wanted to help maximize Aurelius' chances of making his case--if the carebear was honest, that is.

Sadly, Aurelius Micel was no honest carebear. He refused to help clean up the mess he'd made. Even if he lacked the isk to reimburse our gankers, he could've sent me an apology EVEmail for free. (Well, free aside from the 315 isk CSPA charge.) I suppose not everyone is interested in improving highsec. Empire space will continue to be governed by better men and women than Aurelius.
Posted by MinerBumping at 18:56