Well, it was fun while it lasted. We finally ganked bemaa, thereby putting an end to the New Order.

Thanks a lot, John E Normus.

Highsec powerhouse Ranger Balk was ganked, too. Just when you thought things couldn't get any worse!

Somehow, the New Order is still intact. Maybe all of our adversaries got into a big traffic jam with each other or something.

Sigh. It's hard to imagine anyone writing more words than I have to explain their motives for what they do in EVE. This is like handing George Washington Carver a peanut and asking, "Got any ideas?"

More wisdom from the Anti-Ganking channel. 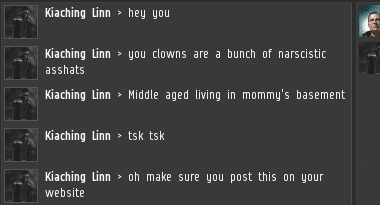 As an accessible Saviour of Highsec, I have an open door policy. I generally accept convo invites from strangers. But as any intelligence agency will tell you, most walk-ins offer little of value.

Another of my candid remarks that will end up costing me, no doubt.

Of all the Russian miners who write tearmails in broken English, my favorite are the ones who include the word "creature" somewhere in the text. I'm not sure what the deal is, but apparently it's one of Google Translate's quirks. I call these "creature features".

In a word, the New Order represents progress. It comes in many forms, as you can see.

The Code liberates women. Before the Code, highsec culture was so backward.

Reater Maulerant claimed to have quite an arsenal at his disposal. But was he telling the truth?

Hmmm. Must be 700 confirmed kills in real life, then.

For those who return after having been away for a few years, EVE is a whole new game. There may be fewer subscribers, but look at the quality of the content!
Posted by MinerBumping at 19:14