The True Family of Highsec, Part 1

The word "family" means different things to different people. The New Order, certainly, is a family; it's the one family that truly counts in highsec. On occasion, that concept of a family must trump other potential definitions--sometimes in unexpected ways.

Those who hate the Code or attempt to minimize its influence would be surprised and disheartened to discover how often it's the miners themselves who approach our Agents. Jaroth Kings was a man in a hurry. He wanted to get the whole "permit" thing out of the way as quickly as possible.


Liek DarZ > No, sorry, it is not my job to cater to someon's laziness.
Liek DarZ > If you follow the rules, yes, you can keep mining then
Liek DarZ > The rules are given in the link above
Jaroth Kings > ok so i red the rulz now what?

Agent Liek DarZ was contacted by Jaroth. Liek tried to help the eager carebear as best he could. But he didn't indulge the miner unnecessarily. When needed, he showed firmness. Liek knew that although he could be a friend to the miner, he was also an authority figure.

Liek had done Jaroth a huge favor. First, he'd sent him a link to a user-friendly restatement of the Code. Then he sold the miner a permit and sent him even more information about the Code via EVEmail. 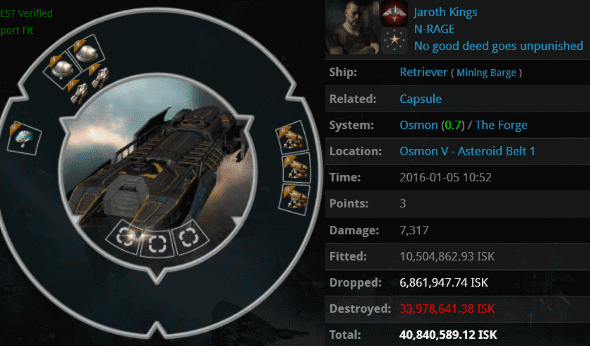 Less than two hours later, Liek DarZ returned and killed the untanked miner. Liek had known there was something off about the guy. He checked up on Jaroth only to see what he'd feared: The miner had no intention of actually obeying the Code. Jaroth was basically a scammer, though I suppose in this case he was a scammer who gave money instead of taking it.

Jaroth sputtered in disbelief. And yet, if you examine his reaction closely, you'll notice that he immediately began asking about possible ways he'd broken the rules. He knew he wasn't innocent.

The miner now resembled a student who claimed he'd done the reading assignment the night before--while hastily flipping through the pages in class the next day.

Agent-aspirants, take note! Liek didn't need to bully or torture Jaroth to get a confession out of him. He politely but directly questioned the miner's story. Before long, Jaroth admitted that he violated the Code.

Having been exposed as a Code violator, the miner took off his mask: He was a Goofus.


Liek DarZ > See, you made a contract and then did not stick to the terms
Jaroth Kings > im paying to mine
Jaroth Kings > not just u but ccp aswell
Liek DarZ > "but for mining ships specifically it means to use a Procurer or Skiff - those emphasize tankiness over yield or laziness-inspiring large cargo holds. Please consider this information!"
Liek DarZ > I think that part is specific enough
Jaroth Kings > ??
Jaroth Kings > bla bla

The Goofus wasn't interested in being told what to do, no matter how essential the instructions were for his safety and the good of highsec. Jaroth terminated the convo.

During their second attempt at a proper post-gank conversation, Jaroth made it known that he wasn't interested in getting better. He'd given up on highsec.

On what must be the slowest-ever journey to wormhole space, Jaroth repeated his cynical beliefs about the Code. If Jaroth were to be believed, this would be the last our Agent would see of the miner. Liek knew better. And our hero was determined to see justice done.

To be continued...
Posted by MinerBumping at 18:42