The New Order's supremacy is known and felt in highsec. This wasn't something that was merely handed to us; it was built through the discipline and ingenuity of our Agents. Though the carebears may not be able to replicate our Code and our Agents' noble qualities, they can respect the power these things give us. Thus, when an Agent enters a highsec system and makes the Order's presence known, the locals can't help but salute. 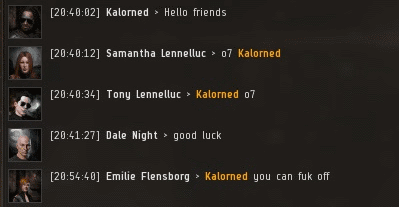 ...However, there's always at least one bad apple in the bunch.

Agent Kalorned took a tour of the Zemalu system in Derelik. Much of the region has been pacified, thanks to his efforts. Because the level of resistance has declined over the years, when a restless miner like Emilie Flensborg does make trouble, Kalorned can quickly target her.

Kalorned located Emilie's Covetor and began bumping it. Emilie's open hostility encouraged other miners in the system to raise their own protests. Things were getting out of hand.

Our Agents know they're on the side of goodness and light. They're natural optimists; they believe in the potential for all miners to obey the Code. Emilie didn't believe in rules, though. She wanted to embrace her most primitive instincts. 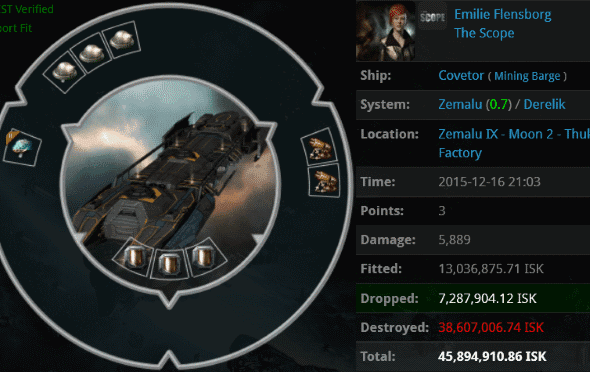 ...So Kalorned killed her. The most difficult miners only respect one thing--strength.

Emilie's Covetor was completely destroyed. With her EVE career in ruins, it was an opportune moment for her to turn her life around. She refused. She was too angry.

Click for full-size version
In Emilie's twisted view, the righteous gank of her Covetor didn't prove the legitimacy of the Code. On the contrary, she added the incident to her list of reasons not to comply!

Carebear nihilism--of the sort we've spoken about before--crept into Emilie's heart. She didn't care about the Code, about her lost ship, about anything. All she had was rage.

Emilie's spirit of defiance threatened to give birth to a pan-miner resistance movement in Zemalu. Zoobz Zoobaz, Emilie's earlier convert, had gotten on the killmail of one of the gank Catalysts, though obviously he failed to stop the gank of Emilie's Covetor.

Kalorned urged Emilie to join modern civilization and submit to the rightful authority of highsec. Her fury only grew.

Click for full-size version
Kalorned genuinely pitied poor Emilie. Animated by her anger and desire for revenge, in the end she would feel only emptiness. Kalorned knew this. He'd seen it happen to other miners.

Click for full-size version
Zemalu local continued to burn. Emilie's Covetor had been neutralized, but the sense of order and tranquility in Zemalu was threatened. Kalorned faced the fight of his life.