There's a clear divide in highsec today. Even those who are neither gankers nor miners are picking sides. Do you stand with the future of highsec--the New Order--or do you cling bitterly to highsec's dark past? 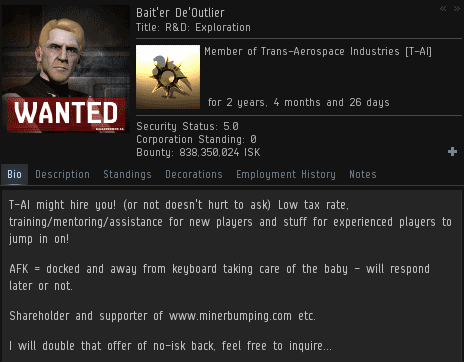 Bait'er De'Outlier is a modest, quietly dignified highsec citizen. He engages in research and exploration. He's not a radical, nor even a partisan. As a responsible fellow, he included in his bio a statement that he only goes AFK when docked, and that he supports the New Order. He owns 10 shares.

But even this small statement of support soon drew the attention of Marcie Stokes. Needless to say, she wasn't happy about it. While Bait'er was in the Mora system of Kor-Azor, Marcie saw his bio and began screeching in local.

Marcie was acting as if Bait'er had destroyed her Retriever or something. In fact, he hadn't done anything to her. But when Marcie read Bait'er's bio, she felt like she'd been emotionally ganked. She was triggered!

Marcie had just about had enough. The more she looked at it, the angrier Bait'er's bio made her. She was ready for war.

Marcie would've happily wardecced Bait'er for his outrageous bio, but she couldn't afford it. She blamed Goons/CODE./whomever for her empty wallet.

Bait'er tried to explain that he wasn't even a ganker. He wasn't a member of CODE., and he didn't even do freelance Code enforcement by bumping or anything. Marcie didn't care. With little warning, the conflict escalated.

You see why miners are instructed to calm down? Marcie was losing control.

Though he wasn't a Code enforcer, Bait'er did have some friends in the New Order. A few months earlier, he'd helped Agent Mike Adoulin dispose of a rogue Orca. Now Mike repaid the favor by visiting the Mora system to supervise the angry carebear.

Mike gently warned Marcie that she needed to rein in her temper, lest she say the wrong thing and receive a punishment from the GMs.

Though she wasn't willing to calm down or reconsider her conspiracy theories, Marcie did decide it was time to take a quick break from EVE. The crisis was averted, and the Mora system could relax. A victory had been won that day in Kor-Azor. Nevertheless, the Marcie incident should serve as a warning to all who would endeavor for peace in highsec: Carebears go ballistic at the slightest provocation. Rebels, you think the New Order "trolls" miners by ganking them and requesting 10 million isk? Miners have been enraged by a lot less.
Posted by MinerBumping at 18:22