The True Family of Highsec, Part 2

Previously, on MinerBumping... Agent Liek DarZ was contacted by Jaroth Kings, a highsec miner who was interested in buying a permit. After selling a permit to Jaroth and informing him of all the wonderful rules of the Code, Liek treated the miner to a surprise drop-in. Liek was horrified to discover that the miner was flagrantly violating the Code! He had no choice but to terminate the miner's vessel and revoke his permit.

The miner no longer pretended to be Code-compliant. He defiantly encouraged Liek to take further disciplinary measures against him. It was a decision he would learn to regret.

For now, however, Jaroth felt confident he would never suffer any additional penalties for his bad behavior. 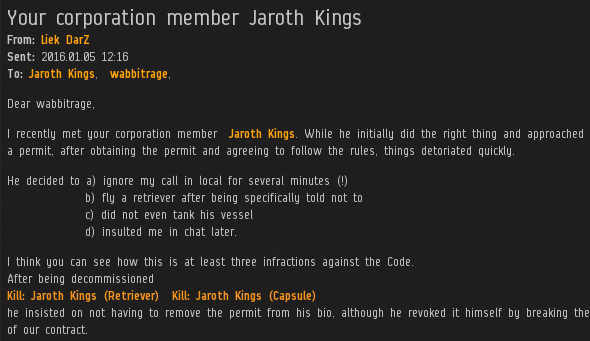 Within a short time, Liek penned a form EVEmail to wabbitrage, the CEO of Jaroth's corp.

As it turned out, Liek was familiar with wabbitrage, who was a permit owner himself. Most likely, wabbitrage had been the one who instructed Jaroth to seek a permit in the first place.

Liek concluded the EVEmail with a log of Jaroth's greatest hits. Miners rarely realize that when they spew insults at our Agents, word gets around.

Liek DarZ is an elite Agent of the New Order. He keeps himself busy with the important work of improving life all across highsec. Thus, Jaroth was a low-priority item. But a few days later, Liek had an opening in his schedule. He took the opportunity to follow up with wabbitrage.

The New Order exercises absolute authority over highsec, but it never does so in a heavy-handed manner. Liek's goal was not to tell wabbitrage how he must run his corporation, but rather to guide him toward the correct answer.

At first, wabbitrage wanted to give Jaroth a verbal warning only. Liek offered wabbitrage the chance to come up with a more suitable alternative.

Then the CEO tried to change the subject. Liek could tell that something wasn't quite right here.

wabbitrage began to show signs of frustration. He almost appeared to be reluctant to discipline his corp member. Trying to redirect an Agent toward another target is a classic carebear move (e.g., a miner saying, "What about the mission runners?").

The CEO had all the formalities down pat--praising my name, etc. And yet... You could almost hear the "but" coming.

wabbitrage was losing faith. He was smart enough to avoid breaking the Code--such a course was suicidal, he knew--but he didn't feel the Code in his heart. Liek DarZ had arrived not a moment too soon.

A lack of enthusiasm for the Code can be poisonous, especially in a corp CEO. The line members of the corp take notice. Maybe that's why Jaroth had acted as though his mining permit was a license to behave like a bot. wabbitrage's corp was in trouble. It was up to Agent Liek to rescue them, and to teach wabbitrage to love the Code again.