Previously, on MinerBumping... Unrest in the Zemalu system! Agent Kalorned's visit to the provinces of Derelik was disrupted by an angry outburst from Covetor pilot Emilie Flensborg. Our Agents know how to handle hecklers. Kalorned bumped Emilie and dropped some gankers on her Covetor. Oddly, this show of strength only fueled Emilie's rage.

Even a miner who lacks a mining ship should know how to calm down. For the sake of the general welfare of EVE, I'd recommend that CCP make anger management lessons a prerequisite for flying mining barges.

Emilie's protest in local chat gained her some allies. Earlier, Zoobz Zoobaz had voiced support for Emilie's anti-Code agenda. He'd even used a Thorax to try (but fail) to stop the gank of Emilie's Covetor. 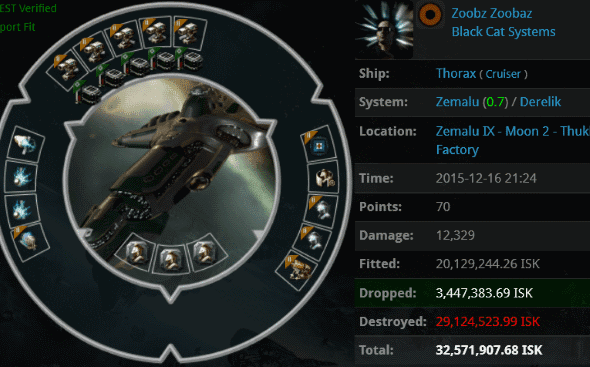 Poor Zoobz soon shared the fate of all who would oppose the New Order. His prized Thorax was obliterated.

You may have assumed that the Thorax was suicide ganked. Not this time. Our Agents love shooting ships that can shoot back, so Kalorned challenged Zoobz to a duel. Kalorned's performance in battle was exactly what you'd expect from a New Order Agent: brilliant, stylish, and completely victorious.

You see? Carebears won't put a "gf" in local even when they're given plenty of chances to shoot back.

Public opinion in Zemalu pivoted back in favor of the New Order.

In the face of overwhelming evidence, Emilie dug in her heels. Nothing ever counts as "PvP" when our Agents do it.

Kalorned is always magnanimous in victory. I supposed he'd be gracious in defeat, but he's never had one of those.

Win the battle, win the argument. That's how we do it in the New Order.

Over half an hour after she began her tirade, Emilie showed no signs of calming down. But it was clear to everyone that her resistance movement in Zemalu was past its peak.

Emilie's failure to stop Kalorned only made her anger burn hotter. She stepped up her rhetoric, doubtless alienating even some of her fellow anti-Code types.

By this time, Kalorned began to seriously question Emilie's willingness to buy a mining permit.

After an hour of almost uninterrupted ranting in local, Emilie was still going. The former Covetor pilot maintained her spirit of defiance. Kalorned felt sorry for her, but he was satisfied that Emilie's rebellion no longer posed a serious threat to Zemalu. In time, memory of the miner would fade away. And one day, Kalorned knew, Emilie herself would be the proud owner of a New Order permit--unless she quit the game, which would also be perfectly fine. After all, EVE isn't for everyone. It's for people like us.
Posted by MinerBumping at 18:40