As I've often observed before, there are countless good reasons why someone would buy shares of New Order stock.

Every reason is a good one. 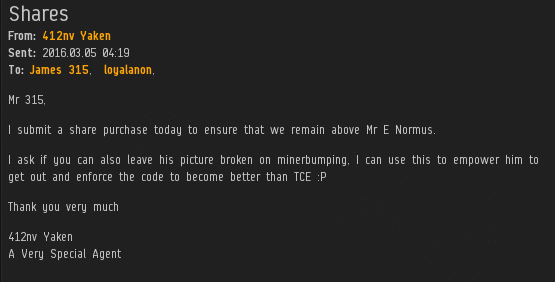 EVE players take great pride in appearing on the month's Top Supporters list on MinerBumping. It's a place of honour.

Speaking of honour, Zopiclone purchased an additional 470 shares and sent us over the 858 billion isk mark, earning her a Supreme Protector's Tip of the Hat™.

Good deeds echo across the EVE galaxy. Judas Khan was impressed by one of our Agents, and all of highsec was enriched as a consequence. Judas purchased 1,000 shares and sent us over the 859 billion isk mark. A complimentary Supreme Protector's Tip of the Hat™, Mr. Khan. And well done, Agent NotTheSmartestCookie.
Posted by MinerBumping at 18:11