Kusion, you say? I'll look into it.

In the meantime, let's open a new edition of the Highsec Miner Grab Bag!

In-game x 2. You know, these miners would be much happier if they learned how to kill people's spaceships in-game. That way they wouldn't need to tell everyone to die.

The rebels love to accuse our Agents of bullying, harassment, and griefing. "If miners respond with anger, it's only because you drive them to it," they say. To which I reply:

Bane Grim lost a contract because he failed to purchase a 10 million isk mining permit. Cutting corners will always cost you in the long run.

Bruce Funaila was wrong on both counts, of course: The Code is forever, and ours is the finest content in the game. 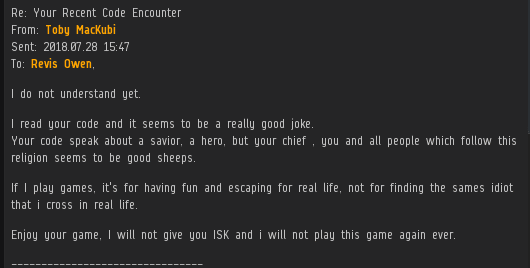 Toby MacKubi called everyone in the New Order a sheep--and then he quit the game because he couldn't graze on asteroids in total safety. Actually, I think Toby would've enjoyed a sheep-based game a lot more than he enjoyed EVE.

Miners usually send tearmails to me via EVEmail, but Tagalong TheVagabond sent this message by regular e-mail:


For now I oppose your "order." However as a reasonable individual new to this game I was hoping to have a conversation with you so that I could understand your goals intentions and why I as a player who only plays 5-6 hours a week with no aspirations of omega status would offer you and your zealous followers an amount that presently exceeds my current total isk to purchase an indulgence. I have visited your website and have read the code as well as visiting other pages of the site.

Please avoid using language in your responses that indicates that "The people" there are obviously numerous people (including new players) who have never heard of "CODE" or had a choice in the matter. This of course makes such statements false and hollow. I am seeking logical answers from a meta perspective. Not answers stemming from an in game perspective.

I await your response in what I hope will be intelligent discourse. I will base whether I continue to engage in this game on your replies. As if a game is not fun it is not worth playing.

Please only respond in e-mail as I'll not be logging in until our discourse is finished or I uninstall.

Tagalong, you should purchase a mining permit because the Code requires it, and because it is the will of the people. Good luck in your next game.

I don't wish to split hairs, so I'll indulge Wolpe Umbras' argument. The ore in highsec is owned by no one until it is mined--at which point I own it. You still need a permit.

I'm sorry, but where's the contradiction?

As usual, the miner has it wrong. Our Agents don't have delusions of grandeur; they have grandeur. Have you ever seen a Code enforcer in action? It's a sight to behold. It's the reason they made EVE.

If I'd seen this EVEmail years earlier, we might be living in a world where MinerJostling.com is EVE's most popular blog.

This is a typical reimbursement request. Cory Koraka claims that if an Agent had asked him to, he would've voluntarily handed over the ore he mined. However, I'm confident that if we had the ability to create a parallel reality and put this to the test, Cory would've refused to hand over the ore. He would've challenged our Agent's authority and then insulted him. Can you believe the nerve of this guy? The gank was justified and Cory should apologize. Reimbursement denied.
Posted by MinerBumping at 18:09