Previously, on MinerBumping... Anti-Ganker Lahnius railed against the mighty CODE. alliance through his ganker alt, Vaughn Law. After an unproductive chat in the Alliance channel and on TeamSpeak, Vaughn vowed to turn against CODE. However, at the last minute, he changed his mind. Vaughn still had hope.

Vaughn extended an olive branch to CODE.'s leadership. It had been ten minutes since the fight in Alliance chat had ended. Yet it seemed that some CODE. members weren't ready to forgive him yet.

More troubling to Vaughn was the reaction of Trump The King. He was the only Agent who seemed eager to renew peace talks--but he was insisting on TeamSpeak as the forum.

Vaughn preferred to share his intel and conspiracy theories in Alliance chat rather than TeamSpeak. For some reason, though, he wasn't persuasive--even in his chosen venue.

To Vaughn's consternation, Agent Trump was still hung up on the idea of going back to TeamSpeak. Vaughn felt he'd already laid out a solid case against Agent Aaaarrgg.

As a show of good faith, Trump removed the offending Agent from the MinerBumping channel--or did he? 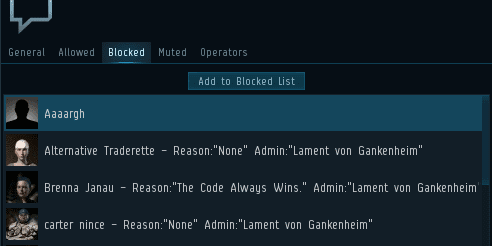 Trump linked a screenshot to the MinerBumping blocked list. Sure enough, Aaaargh was listed there. He was true to his word. 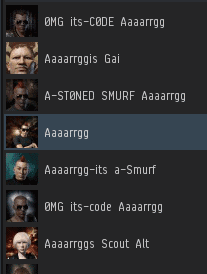 Of course, Aaaarrgg was still allowed to use the channel. He was a highly decorated Agent, after all.

As Vaughn puzzled over the screenshot, he suddenly let loose a burst of anger, as often happened when he got confused.

The angry former Anti-Ganker grew increasingly frustrated. By now, he'd hoped to be restored as a CODE. member in good standing. Maybe CODE. leadership didn't realize how close they were to losing his support?

Vaughn was stunned by Trump's indifference. He couldn't believe what he was hearing.

Trump had flippantly suggested that Vaughn return to the dark side. In fact, Vaughn was now considering that very option. If he didn't get the respect he deserved, he would be back in Anti-Ganking by the end of the night.

Vaughn was tired of asking for respect. The time for words was over. From now on, Vaughn would take action.