Previously, on MinerBumping... Vaughn Law, also known as the Anti-Ganker Lahnius, prepared to go to war against the mighty CODE. alliance. And his first target was none other than Alt 00, the only Agent he'd ever truly respected.

Thus far, nothing could entice Vaughn to return to the CODE. TeamSpeak server--not even the promise of Alt 00's presence.

Again and again, our Agents offered to hash things out on voice comms. Vaughn was insistent: He'd never again risk his reputation in that way.


Trump The King > Vaughn Law
Vaughn Law > look asshat Trump The King ... you did this ... you caused this ... i tried to tell you that minerbumping was infiltrated by ag ... but no you wouldnt listen ... and you even went farther toi insult ... so hey f u man ... man ,,., i tried
Vaughn Law > btw asshats i dont reply to douche mail

Slowly but surely, Vaughn's ability to type was deteriorating. In Agent Trump's view, that made voice communication all the more essential.

By now, it was clear that there was absolutely zero chance for successful peace talks. Vaughn was absolutely committed to rejoining the Anti-Gankers. 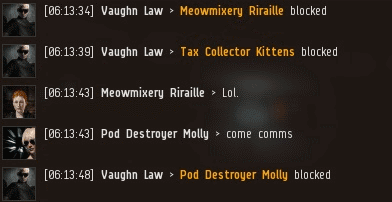 To show he was serious, Vaughn began to block various members of CODE. who were watching the spectacle in the Alliance channel. Trump The King remained unblocked, however--for now. 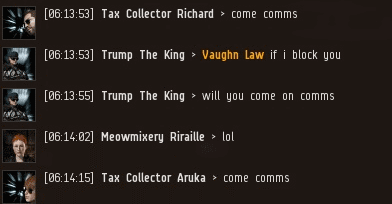 The rebooted Anti-Ganker grew increasingly frustrated by the endless invitations to join TeamSpeak. In fact, being badgered in this manner was almost as unpleasant as being on voice comms.


Vaughn Law > Trump The King dude i told yer dumbass ... i went on comms only to hear retards saying some of the dumbest shit i have ever heard in eve
Vaughn Law > i used to be ag ... i went code because i saw a better way ... biut what i have learned is code is a buncgh of idiots pretending tobe special ... time to back to ag ... and not the channle ag cuz those guys are morons ... we are our own ag ...

Though Vaughn planned to return to his rebellious ways, this time would be different. He still despised the "mainstream" Anti-Gankers who ran the Anti-Ganking channel.

Vaughn was confident that he alone possessed the skill to actually prevent ganks. He referred to the killboard of UNRealGUNS, a corporation that consisted of himself and a few alts:

Strangely, though, UNRealGUNS was apparently inactive from August 2017 to January 2018, the period during which Vaughn/Lahnius claimed to have scored his victories against CODE. And when the hiatus ended in January 2018, it was scarcely more active.

Even so, Vaughn felt he was a cut above the other rebels who had crossed Agent Trump's path. This time, Trump would pay.

Vaughn spat at the Agent one more time before he unveiled his new vision:

Vaughn's new breed of anti-Code resistance fighter had a name, one which would spread fear among every member of CODE.: Hardcore AG.