Previously, on MinerBumping... Anti-Ganker Lahnius dreamed of destroying the mighty CODE. alliance. The first step in Lahnius' master plan was to defeat Agent Alt 00 and liberate the miners of Nakugard. However, his campaign got off to a rocky start when he was unexpectedly wardecced by Failed Diplomacy corporation--which accused Lahnius of working for CODE.! 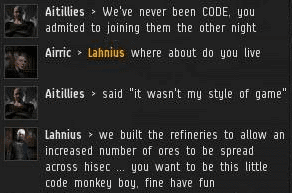 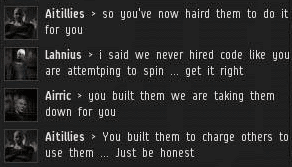 Members of Failed Diplomacy suggested that they might use the wardec as an opportunity to attack Lahnius' prized refineries in the Nakugard system. The threat rattled Lahnius. 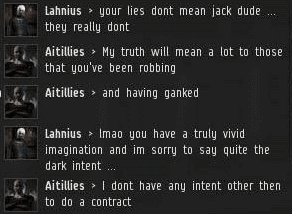 To make matters worse, Lahnius' refineries were only under threat because people thought he was affiliated with the very group he despised so much. 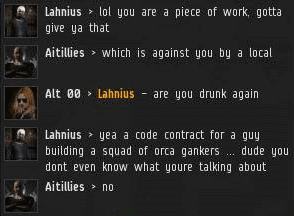 Slowly, Lahnius began to reconsider the notion that CODE. had tricked Failed Diplomacy. Could Alt 00 be funding their contract? Unbeknownst to either anti-Code organization, CODE. wasn't responsible for the mix-up; the rebels were simply clueless. Alt 00 looked on in satisfaction, occasionally interjecting a comment for her own amusement. 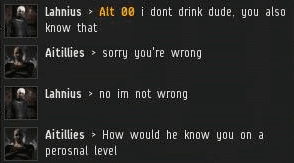 ...Then Lahnius said something which he would come to regret. 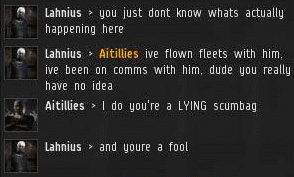 Aitillies was already suspicious of Lahnius' connection to Alt 00. Lahnius' remark about Alt 00 knowing he didn't drink cinched it: Lahnius and the CODE. member were thick as thieves. 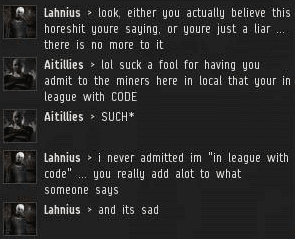 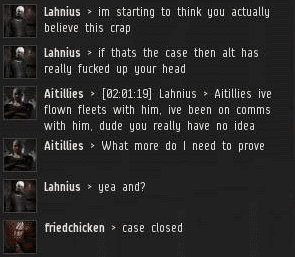 There could be no doubt that Lahnius was CODE.'s man in Nakugard. Failed Diplomacy was now absolutely committed to ruining him. 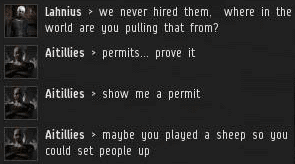 Lahnius protested his innocence. He'd rather spend his time working on ways to attack CODE., but instead he was forced to argue with CODE.'s other enemies. How Kafkaesque. 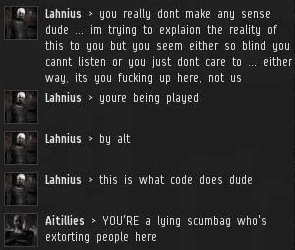 Our Agent continued to silently observe as her sworn enemies cursed each other for being under her influence. 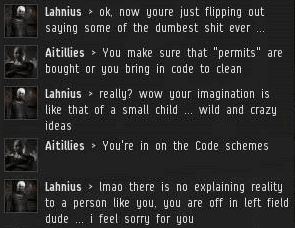 Neither rebel would back down from a fight--or at least a slap-fight in local. Meanwhile, the ganks of miners in Nakugard proceeded as usual.

So far, it appeared that Alt 00 would win the fight against Lahnius without needing to fire a shot. Would her enemies remain confused, or would they eventually discover their mistake and find a way to unite against CODE.?