Previously, on MinerBumping... The carebears of Isanamo had a new champion: Akmaund Askiras, who saw himself as Anti-Ganking's next big thing. Yet he proved unable to stop the Agents of the New Order from ganking. When this fact was demonstrated to him, it led to a bitter exchange in local.

Our Agents teased Akmaund for getting a Blackbird CONCORDed while trying to stop a gank a few days earlier. Akmaund accused them of being salty--while spilling salt all over Isanamo.

In a rare moment of introspection, Akmaund admitted that he had difficulty making friends in EVE.

If miners disliked Akmaund, maybe he had something going for him after all. Perhaps if he were given proper guidance, he might learn to aim his guns in the right direction and enforce the Code?

...But it was not to be. Akmaund was a committed Anti-Ganker.

As an anti-Code rebel, Akmaund saw fit to lead the miners. He lectured them--the ones who hadn't blocked him already, that is.

When ganked, old miners often claim to be newbies. Akmaund did the opposite: Despite claiming ten years in EVE, his character was only weeks old.

Isanamo's miners failed to acknowledge Akmaund or his advice in any way. The Anti-Ganker ranted and raved in local.

Spurned by those he was sworn to protect, Akmaund took his anger and redirected it toward the Agents of the New Order. Now Lewak was in his crosshairs.

Akmaund spotted Agent Ernst Steinitz in one of the asteroid belts. The Anti-Ganker's pulse raced. Would he finally get a chance to counter-gank a ganker?

The first step in Akmaund's plan was to win a decisive engagement against the mighty CODE. alliance in Isanamo. Then he could proclaim his victory in the Anti-Ganking channel and take over. It was a perfect plan, he believed. But something was about to go wrong. 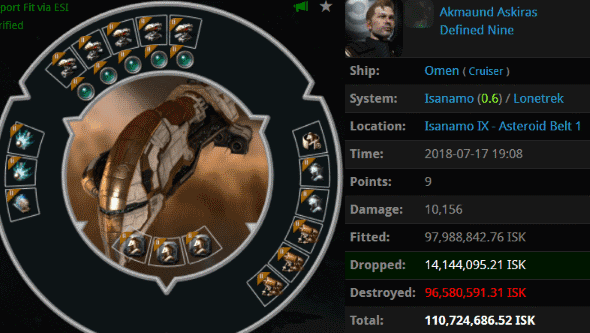 Just as he was bragging about his skills, the Anti-Ganker was ganked. Would he accept defeat gracefully? Or would he do the other thing?