Previously, on MinerBumping... Akmaund Askiras imagined that he was destined for greatness. If he could drive the mighty CODE. alliance out of the Isanamo system and save its miners from being ganked, Akmaund's triumph would rally the Anti-Gankers around him. Instead, Akmaund failed to stop CODE., and fellow Anti-Ganker Knowledgeminer ridiculed him in front of the rest of the rebels. A heated argument ensued.

Knowledgeminer believed that Anti-Ganking could only succeed if it actually stopped ganks. Making up stories about imaginary victories wouldn't do.

Akmaund and some of the other Anti-Gankers had a different perspective. Since they were unable to stop CODE., pretending to win was the next best thing.

Fellow rebel Faye Salentine was so incensed that she actually put a (modest) bounty on Knowledgeminer. That would teach him not to criticize people for pretending to defeat CODE.

Faye spoke for most of the anti-Code resistance when she said it simply didn't matter. Anti-Ganking wasn't in the gank-prevention business anymore. Fantasizing about beating CODE. was just as good.

With both sides firmly entrenched--despite theoretically being on the same side--it appeared that nothing was going to get resolved. 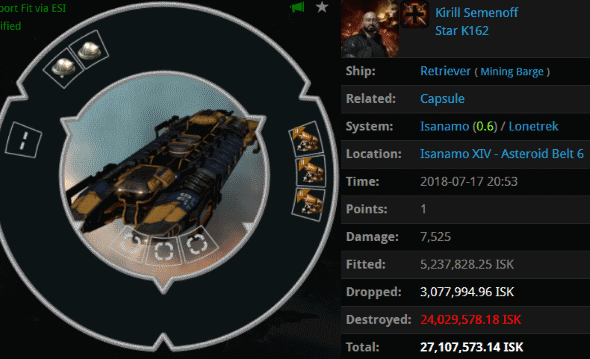 The "gank in progress" was soon an accomplished gank. An unlicensed miner was destroyed in Isanamo, right in front of Akmaund's very eyes.

Putting a brave face on his latest failure, Akmaund celebrated the CONCORDing of the gank ships.

Anti-Ganking, as usual, got the news right on time.

'Twas another crushing defeat for the rebels. They couldn't prevent a gank even when they had someone sitting right there in the asteroid belt while it was happening.

Akmaund had failed before, but this time felt different. He was frustrated and angry--at himself and at the AFK miner. Maybe some of Knowledgeminer's words sank in.

The aspiring rebel leader couldn't understand why the miners were so irresponsible. Why wouldn't they help him help them?

Akmaund's efforts to save the miners were ineffective. But at least he tried. And maybe the miners didn't even deserve that much.

Akmaund lost faith and went inactive. His dreams of battling CODE. and leading Anti-Ganking disappeared into the night--like so many miners' ships and pods.
Posted by MinerBumping at 18:10