Back in the USSR, Part 1

Each suicide gank in highsec is a lesson--and a fork in the road. 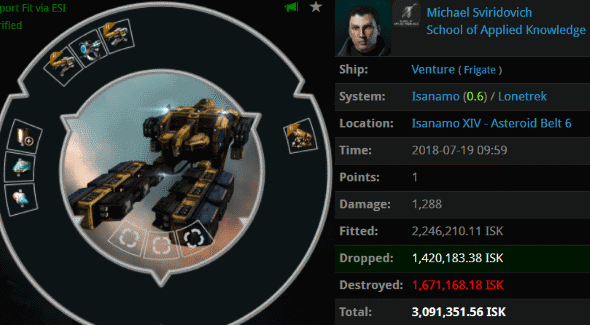 Michael Sviridovich had been playing EVE for about seven months. That might sound like a long time. It is. But Michael made precious little progress in the game during those seven months. All he had to show for it was a highsec mining Venture--which exploded.

Michael was lucky to be ganked by Agent Katy Melons. She was kind enough to send him a bunch of information about the Code along with his lossmail. Michael was presented with a fork in the road. He went the wrong way.

Anyone who calls our Agents "bullies" is obviously acting in bad faith; nobody can be reasonably expected to think they're not going to experience spaceship combat in a spaceship PvP game. And that goes double for highsec, the most crowded area.

Michael's bad faith was confirmed when he pretended not to recognize the name of the Saviour of Highsec. Thanks to the decline in news stories about nullsec over the past few years, I am arguably the most famous player in EVE today--and in highsec, there's not even an argument about it.

Michael tangled himself in a web of lies. First, he doubled-down on his feigned ignorance about me, while simultaneously comparing me to Hitler. (Why would you compare someone to Hitler if you don't know anything about him? Are people assumed to be Nazis by default?) Then he accidentally admitted to being familiar with the mighty CODE. alliance's Venture-killing contests. So much for pleading ignorance.

Agent Katy corrected the miner and encouraged him to learn more about his affliction: Bot-aspirancy. 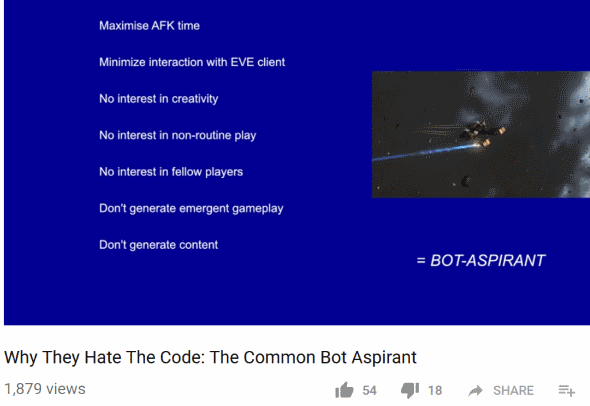 Katy linked the miner to a YouTube video by Agent Sasha Nemtsov. She could only hope that he'd watch it, and that its lessons would sink in.

Tragically, the miner confessed that bot-aspirancy was the only reason he'd even begun playing EVE. Someone on CCP's marketing team needs a talking-to, I think. Assuming there's a marketing team. 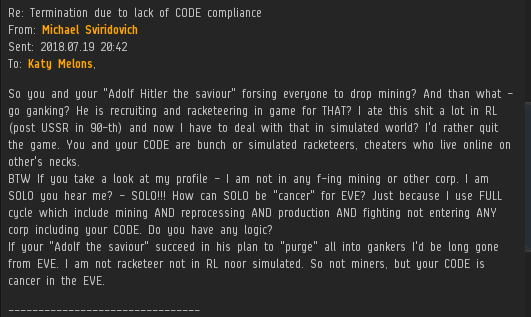 Several hours later, Michael composed a fiery rant and sent it to Agent Katy. According to the miner, the Code triggered bad memories of his experiences in post-Communist Russia in the 1990s. Could Katy help the miner deal with his personal baggage and embrace the New Order? Or would he rage-quit and leave the game forever?