You can tell a lot from an EVE character's name. 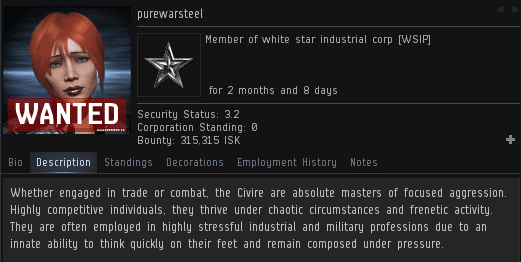 Case in point: purewarsteel. Judging by her name, this was a player with legendary resilience in the heat of battle. 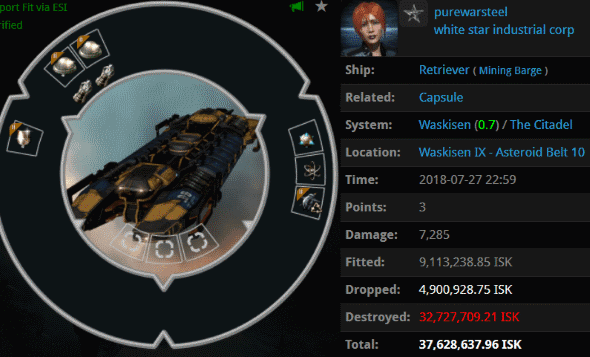 ...Or not. purewarsteel turned out to be just another highsec miner. For her crimes, she lost her Retriever and a 557 million isk pod.

If you think purewarsteel was defenseless, though, think again. The moment her ship and pod were destroyed, an alarm sounded--one that summoned a fleet of bloodthirsty mercenaries.

Our Agents hadn't counted on dealing with a bunch of hired guns. Under the circumstances, they felt it appropriate to invite purewarsteel to another channel, rather than hashing out the matter in local chat.

purewarsteel accepted the chat invite and found herself surrounded by Agents. She immediately felt more relaxed.

Seeing how comfortable the miner was, our Agents casually introduced the subject of mining permits. purewarsteel had other plans.

Unlike other highsec miners, purewarsteel didn't need a permit: She had a special arrangement with an army of mercs. But it wasn't clear what exactly that arrangement was.

Our Agents were puzzled by the miner's words. Gradually, they came to realize that the miner herself must be confused.

There was obviously a lot to untangle in purewarsteel's mind. Our Agents didn't have time for that; there were other miners who needed their help.

Maybe purewarsteel was just stalling. The longer she kept our Agents' attention, the more time her fleet of mercenaries would have to organize its offensive against New Order territory.

Our Agents were reaching the point where it might become necessary to write purewarsteel off. They could gank her again later to see if her mental condition had improved in the meantime.

The fog cleared up slightly when purewarsteel confessed that she didn't actually know any mercenaries. She simply mined for other people--which is arguably even worse than mining in highsec for yourself.

purewarsteel claimed that her superiors/clients/whatever set her up with a generous reimbursement program. One must wonder, though, whether her Retriever was properly fit to qualify for SRP. If so, there's a disturbing new mining meta.

Before our Agents could persuade purewarsteel to reveal any more information, the miner excused herself, citing a chat-induced illness. I'd have to concur with Agent Lewak, though: purewarsteel's problems surely came from spending too much time around Veldspar.
Posted by MinerBumping at 18:15