Previously, on MinerBumping... In the Nakugard system, Agent Alt 00 was confronted by the mighty CODE. alliance's latest archenemy: Lahnius the "Hardcore" Anti-Ganker. But Alt 00 didn't need to lift a finger; Lahnius' efforts were frustrated by Aitillies of Failed Diplomacy corporation--another enemy of the Code. Both rebels were convinced that their natural ally was secretly working for CODE.

Earlier, Failed Diplomacy had broadcast a PSA in Nakugard local to warn miners about Lahnius. He returned the favor. 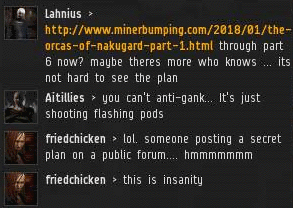 Aitillies wasn't convinced. Lahnius might pretend to reveal "intel" from MinerBumping, but it was all a front. 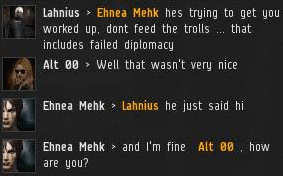 Each time someone entered Nakugard, Lahnius made sure to repeat his anti-Failed Diplomacy propaganda. That way, everyone would know who their true friends were. 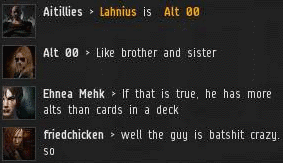 Aitillies found himself dragged back into the debate about who was the real anti-Code rebel and who was the mole. He'd had the momentum earlier, but now Lahnius was putting in more work. 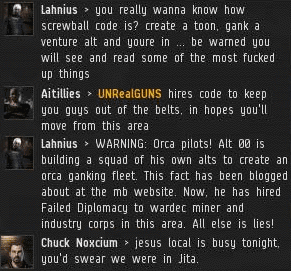 Both would-be resistance leaders disseminated their competing messages. Aitillies wasn't ready to give up just yet. 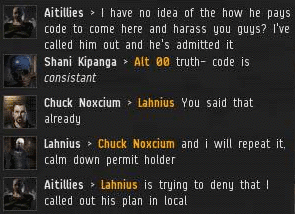 As far as Aitillies was concerned, the debate was over. Lahnius had already incriminated himself. The miners should naturally rally to Failed Diplomacy, not Lahnius' corp. 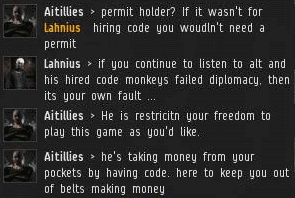 If you've ever wondered why all of the tens of thousands of people who hate CODE. don't just band together and create a united front against us, this should give you an idea of why that wouldn't work. 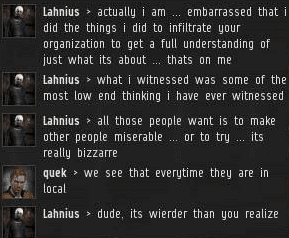 It suddenly occurred to Lahnius that his time in CODE. might give him an edge over Aitillies, rather than being a liability. Granted, Lahnius had only spent a week in the alliance, and he'd spent that time solo-ganking Ventures. Still, he could claim access to CODE.'s deepest, darkest secrets. And he could reveal them in Nakugard local to win support from the miners. 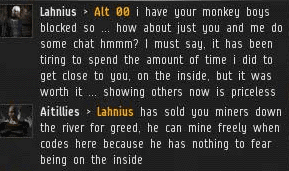 For months--even before his alt joined CODE.--Lahnius had attempted to ingratiate himself with Alt 00. He'd failed to do more than annoy the Agent, but that didn't matter now. Lahnius could recast his failed attempt to win friends as a successful act of espionage: He had the goods on CODE.! 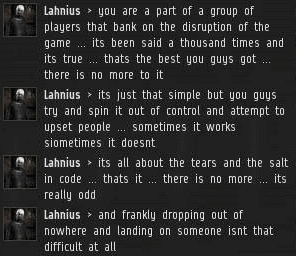 Before the assembled miners of Nakugard, Lahnius worked himself up into an anti-Code soliloquy. When everyone saw the passion he put into his speech, surely they'd know that he was a genuine Anti-Ganker. A Hardcore AG. 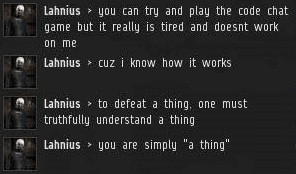 In going on an extended rant in chat, Lahnius sought to prove that he couldn't be provoked into making a fool of himself in chat. 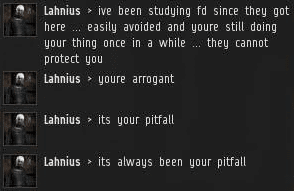 According to Lahnius, CODE. and the anti-Code corp Failed Diplomacy were one and the same. He would defeat them all. Now it was time for Lahnius to wrap up his speech with a thrilling conclusion, one that would restore his credibility as a rebel and inspire all the miners into action: 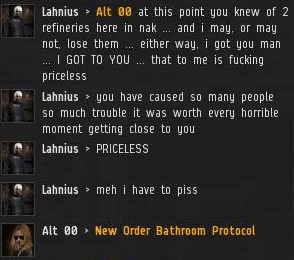 It was the moment of truth. Would Lahnius succeed in putting the rumors behind him--and begin his anti-Code campaign in earnest?