Previously, on MinerBumping... Vaughn Law once again took up the mantle of Lahnius after being decisively defeated in an argument with various members of the mighty CODE. alliance. Lahnius went to the Nakugard system, hoping to put a stop to Agent Alt 00's miner ganking operations. However, Lahnius soon found himself wardecced by a third party.

To Lahnius' amazement, he was wardecced by Failed Diplomacy corporation for supposedly being hired by CODE. Failed Diplomacy hated CODE. almost as much as Lahnius did. But instead of working together, they found themselves at war. 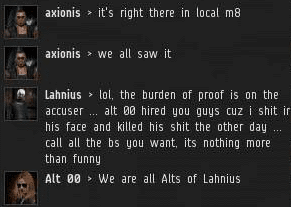 Lahnius, in turn, accused Failed Diplomacy corp of being hired by Alt 00. The Agent herself was in local to witness the proceedings. 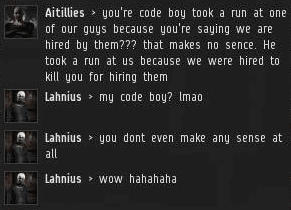 CODE.'s sworn enemies were each convinced that the other was CODE. It was as if the Anti-Ganking channel's paranoia was bleeding into Nakugard local. 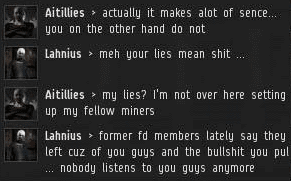 Lahnius was frustrated by this turn of events. He'd planned to launch a full-scale attack against Alt 00. As long as Failed Diplomacy had him wardecced, though, his attention would remain focused elsewhere. The confusion and bad intel couldn't have come at a worse time. 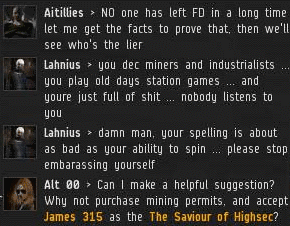 Seeing her two enemies at war, Alt 00 could only offer to play the role of honourable third party. 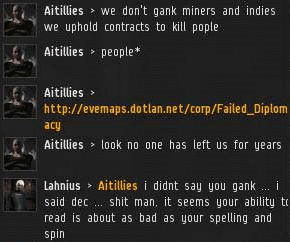 The two rebels ignored Alt 00. They were so obnoxious that they temporarily put aside their hatred of CODE. 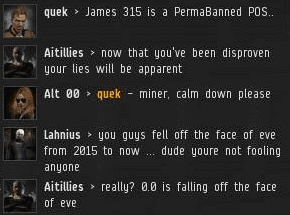 Though the war with Failed Diplomacy interfered with Lahnius' jihad against Alt 00, he was pretty sure he could handle them. Aitillies fought to defend his corp's honour. 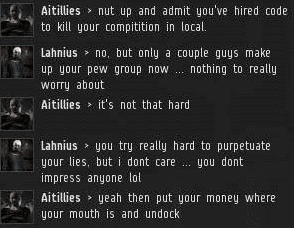 Even so, Lahnius temporarily found himself camped in a station. This left Alt 00 free to gank at will--which, admittedly, was how things always were in Nakugard. 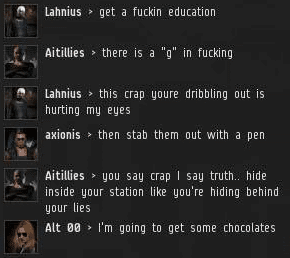 Alt 00 was satisfied that she was winning the war. And, since she knew Lahnius had a tendency to engage in marathon arguments, she decided she'd better get something from the concession stand. 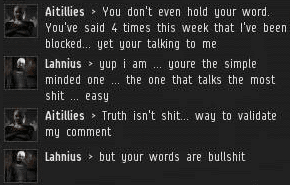 Failed Diplomacy and UNRealGUNS (Lahnius' corporation) proved to be a good match. Aitillies was almost as stubborn as Mr. "Hardcore AG" himself. On the bright side, at least Aitillies wasn't inviting Lahnius to join him on TeamSpeak. 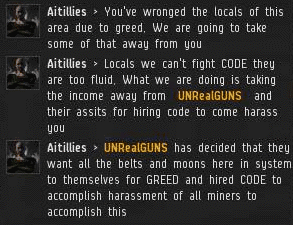 Failed Diplomacy issued a public announcement to the miners of Nakugard: Help was on the way. No longer would they need to fear being ganked by Lahnius' corporation. The only catch was that they couldn't do anything about CODE. because of our "fluidity". 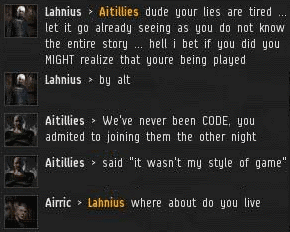 Suddenly, an unsettling thought occurred to Lahnius. What if Alt 00 was playing the two anti-Code rebels against each other?