Previously, on MinerBumping... ashantiavi krystora aka "balou" lost a blingy Hulk. Rather than learn from the Code that was offered to her, the miner made a series of demands and real-life death threats. Then she threatened to get everyone else permabanned for ganking her.

Our Agents were not intimidated by ashantiavi's threat to file a petition. The miner realized that playing the CCP card didn't work, so she resumed her real-life threats.

ashantiavi's request for reimbursement isk was all but certain to fail; she had completely misread her audience.

The miner chose to call it quits, though not before she accidentally called herself a "fucker".

At this point, it seemed clear that ashantiavi wasn't going to get her blingy Hulk back. But she still had a card left to play: If the people who ganked her were unwilling to reimburse the loss, maybe CCP would do something about it. All she needed to do was find a way to get the attention of someone at CCP. 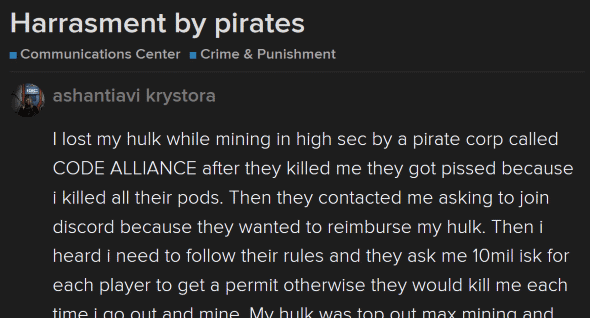 ...So she went to the Crime & Punishment subforum on EVE-O.

ashantiavi decided not to threaten anyone at CCP with bodily harm. Instead, she demanded that CONCORD be reworked to prevent all highsec ganks--or else she would quit EVE and take her huge fanbase with her. 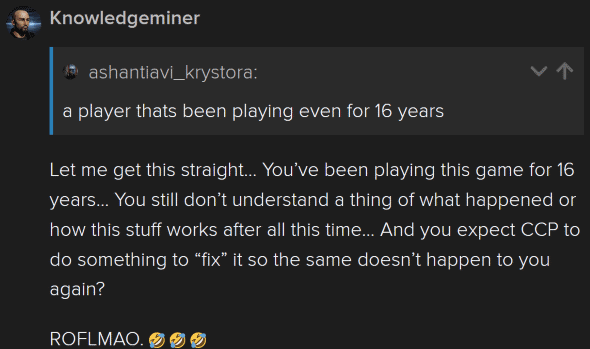 To ashantiavi's surprise and dismay, the forum post attracted nothing but skepticism and mockery. To persuade CCP that she enjoyed popular support, the miner would first need to find a way to win over her detractors.

ashantiavi struggled to gain support for her ideas, some of which were flagged by her fellow posters. 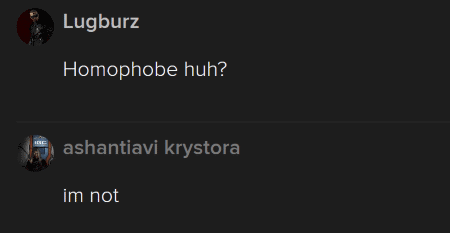 But the miner wouldn't give up. Not when there was a dead 2 billion isk Hulk at stake.

Slowly, ashantiavi began to realize that miners were not well regarded on the Crime & Punishment subforum. She attempted to rebrand herself.

Alas, it was only a matter of time before she showed her true colors. 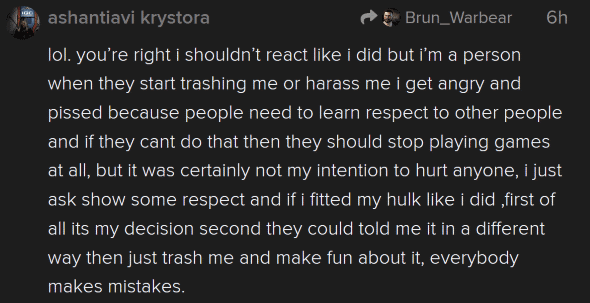 Though she wasn't banned from EVE-O for her EULA violations, the miner's anti-Code effort ended as one might expect--with an apology. But even this couldn't win anyone over to ashantiavi's side. Her wallet remained as empty as her apology.

She should've bought a permit.
Posted by MinerBumping at 18:02