Defender of the Newbies, Part 2

Previously, on MinerBumping... Lots of people talked about wanting to help new players, but the only people who actually did it were Agents of the New Order like Yucie Van Burean. On a routine patrol of the "rookie systems", Yucie was appalled to find long-time player Ads Ford hoarding all of the Veldspar in the system. So Yucie bumped him.

When Ads Ford realized that Agent Yucie was capable of preventing him from stealing ore from newbies, the miner flew into a rage.

On multiple occasions, Yucie invited the miner to buy a permit and move to a non-rookie system. It would have been so easy and so ethical, but Ads Ford refused.

For some reason, the miner took all of the self-loathing that he should've felt and directed it at Agent Yucie. He blamed her for catching him in the act of stealing ore in a rookie system.

Though Yucie was in the rookie system to protect new players, she also felt she could do something to benefit the non-rookies. Our Agent genuinely believed that she could rehabilitate Ads Ford.

Of course, for Ads to improve as an EVE player and as a person, he needed to give the Code a fair shake. If Ads put aside his petty nonsense and dealt with his anger management problem, Yucie's therapy would probably work wonders.

Strangely, the fact that Yucie wanted to help him--the fact at she was so obviously the good guy in the situation--only enraged the miner. He hated Yucie! 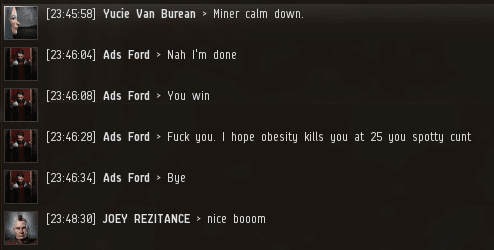 With one last refusal to purchase a mining permit, Ads left the system. But the miner wasn't finished with Yucie yet. As time went on, he sulked and stewed over what had happened. So he decided to send an EVEmail to our Agent and let her know how he felt.

Ads was still angry with Yucie. For whatever reason, he now censored his profanity with asterisks. But the substance of his EVEmails was still awful. 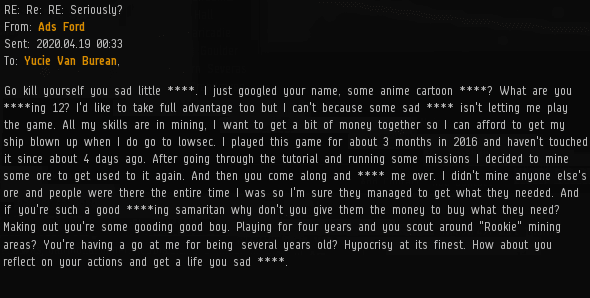 In his EVEmail rants, Ads attempted to defend his decision to mine Veldspar in the rookie systems. He failed to persuade our Agent, however. He couldn't even convince himself.

Yucie still hoped that she might be able to sell a permit to the miner, but Ads was pretty stubborn.

Finally, Ads revealed his new plan: He would continue to mine in rookie systems, but he'd make sure to play EVE only when Yucie was offline. Checkmate.

It was clear that Ads Ford had a long way to go before he was ready to join highsec society. But Yucie's faith was unshaken; she still believed in working toward the amelioration of the miner condition. Regardless, keeping someone like Ads Ford away from the newbies was definitely a good thing.
Posted by MinerBumping at 18:02